Could a Nobel Prize be in MU's future?

COLUMBIA, Mo 12/30/13 (Beat Byte) -- One of the most important milestones in medical history may await University of Missouri School of Medicine researchers, who this month received three U.S. patents for methods that cured type 1 diabetes in mice via a major discovery.

"We discovered that type 1 diabetes destroys not only insulin-producing cells, but also the blood vessels that support them," said microbiology and immunology professor Habib Zaghouani, Ph.D.

The disease's two-pronged attack -- on the insulin-producing cells and the tiny, micro-scale blood vessels that supply them -- was a surprise with significant consequences.   "When we realized how important the blood vessels were to insulin production, we developed a cure," Zaghouani said.

Under review since 2003, Zaghouani's patents cover therapies to prevent, suppress, and reverse the disease.

Published in Diabetes, the American Diabetes Association's flagship research journal, the Zaghouani team's cure delivers a one-two punch:  a new drug that halts the diabetes and adult stem cells that keep it from coming back.

Since publication of their findings in May, Zaghouani and his 8-member team have headlined medical and science news around the world:

And from US News and World Report , Stem Cell Therapy Cures Type 1 Diabetes in Mice.

The excitement is justified.   Curing diabetes in mice -- and the striking discovery that made it possible -- ranks as one of this millennium's most significant medical breakthroughs.   Should the cure succeed with humans, it will be one of the greatest discoveries in all medicine.

But the loss of natural insulin production can take a terrible toll on the heart, blood vessels, vision, and other key aspects of normal well-being.
Among the world's costliest chronic illnesses, diabetes can damage kidneys, nerves, and eyes enough to cause blindness.   It's also inconvenient to treat, requiring needles, pumps, and testing materials that monitor blood glucose and other parameters. 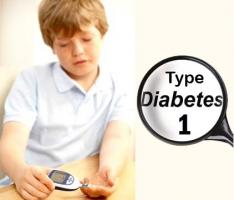 The number of diabetics is on the rise, too.  Between 2001 and 2009, Americans under age 20 diagnosed with type 1 diabetes soared nearly 25 percent.  It may also be linked to non-immune type 2 diabetes, often found in obese adults.

Zaghouani has spent 12 years studying type 1 diabetes in his Mizzou lab, and discovered the mouse cure almost by accident.   In earlier work, he and his team found that Ig-GAD2 -- a substance known as an "immunoglobulin" -- stopped the immune system from attacking the insulin-producing beta cells.

But that was just part of the problem.  Too few beta cells survived the original attacks to reverse the disease, so Zaghouani made a logical decision:  figure out a way to grow new beta cells, which his team did by injecting adult stem cells from bone marrow into the pancreas.

They thought the stem cells would grow into beta cells.  But they were in for a big surprise.

"Instead, the bone marrow cells led to growth of new blood vessels, and it was the blood vessels that facilitated reproduction of new beta cells,"  said Zaghouani.

It was the desired result, but by a different path.  The Ig-GAD2 was given for 10 weeks, with bone marrow transplants interspersed on weeks 2, 3 and 4.   The mice were cured and remained disease-free for the next 120 days, "which is about the lifespan of a mouse," Zaghouani said.

Though the mouse cure remains "many steps away from such a therapy for humans," Zaghouani says his team is "extremely excited.  Our discovery about the importance of restoring blood vessels has the potential to be applied not only to type 1 diabetes, but also a number of other autoimmune diseases."