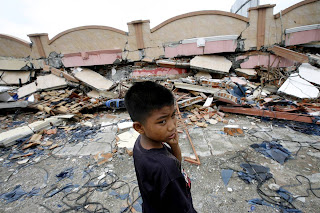 Finding fault with fault- and history-based earthquake hazard maps
COLUMBIA, 9/27/12 (Beat Byte) -- Seismology -- the study of earthquakes -- has some catching up to do with meteorology -- the study of weather and climate -- says a Mizzou geology professor studying why so-called "earthquake hazard maps" failed to predict three of the largest and deadliest quakes in recent memory.
Those earthquakes devastated China, Japan, and Haiti.  Imagine a weather caster failing to predict a similarly-deadly group of hurricanes.

"The public is accustomed to the uncertainties of weather forecasting, but foreseeing where and when earthquakes may strike is far more difficult," said Mian Liu, of MU's department of geological sciences.  "Too much reliance on earthquake hazard maps can have serious consequences."

Liu and his colleagues say better hazard maps -- and better communication about the hazards of relying on hazard maps -- may save lives and money in areas such as the New Madrid, Missouri earthquake fault zone.

"We recommend better communication of the uncertainties, which would allow citizens to make more informed decisions about how to best use their resources," Liu explained.  "Second, seismic hazard maps must be empirically tested to find out how reliable they are."

Liu joined other researchers at Northwestern University and the University of Tokyo in determining that hazard maps fail because of "bad assumptions, bad data, bad physics and bad luck."

In the past four years alone, maps did not predict an earthquake that struck China's Sichuan Province, killing more than 69,000 people; the 2010 earthquake that destroyed Port-au-Prince, Haiti and killed some 316,000 people; and the earthquake/tsunami combo that hit the Japanese coast last year.

Seismologists relied too much on incomplete historical data that failed to foretell future quake activity, Liu says. "Hazard maps tend to underestimate the likelihood of quakes in areas where they haven't occurred previously," Liu explained. "In most places, including the central and eastern U.S., seismologists don't have a long enough record of earthquake history to make predictions based on historical patterns."

Of course, earthquakes are far less predictable with current technology than hurricanes are, an uncertainty that makes seismological predictions "a complicated game against nature," said the study's first author, Seth Stein of Northwestern University.  "Our ability to assess earthquake hazards often isn't very good.   Understanding the uncertainties in earthquake hazard maps, testing them, and improving them is important if we want to do better than we've done so far."