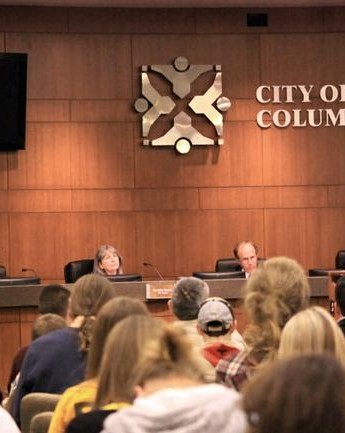 The evening's upshot:  that city manager Mike Matthes had lost credibility and by extension, City Council members had lost the public's trust.

McDavid stood, declared a five minute recess, and walked out.

Just weeks ago, Root explained, the Mayor and city manager publicly declared that, without the defeated TIF, no more downtown development could occur.   Nearly $20 million in "necessary infrastructure" had to be financed.

Now, 1,335 new student apartments were suddenly and unexpectedly up for approval, on a timeline "that does not make any sense:  calling two weekday public meetings when people who work are unable to participate in any meaningful way," Root said.  "I'm truly and deeply flabbergasted."

A print and digital news professor, Bentley reminded baby boomer Council members "when we were the students and the people sitting out here and how disillusioned we were with our government that lied to us and even worse, ignored us."  (Video 1:22:40)

The three developments were

Starting a theme others repeated throughout the 4+ hour hearing, Reuben Stern -- who directs the Mizzou School of Journalism/Reynolds Journalism Futures Lab -- told a story familiar to thousands of Columbia residents.   Sewer backups, year after year, were making life miserable.  (Video 1:25:28)

"You are promising developers of new construction a level of city services that is not currently being provided to residents like me, who live in existing construction in the city," said Stern, who lives at 309 W. Broadway, a house built in 1941 with three apartments, including one in the basement.

"Five years after I bought the property, the basement started backing up from the sewer," Stern said.  "I'm losing

about 25% of my rental income until I can assure a tenant it won't fill with 10 inches of sewage."

Bentley, Root, and Stern wrapped their respective testimony with urgent -- and eloquent -- pleas.

"If you want to regain any faith from your voters and the public -- pause," Bentley urged.  "We have to give people logic they can understand and logic they can believe."