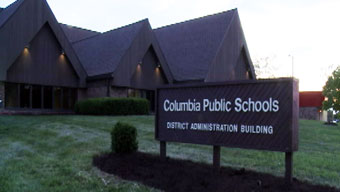 COLUMBIA, 11/12/12 (Beat Byte) -- Columbia Public Schools (CPS) Board Member Jonathan Sessions opened a historical can of worms earlier this year when he took center stage as a booster of blight and enhanced enterprise zones (EEZ).

Between blogs, Facebook posts, and speeches urging the Columbia City Council to blight nearly 60% of the city, Sessions reminded of public school support for the land clearance and urban renewal of yesteryear that wiped out the black business community. CPS was a major beneficiary then, wielding its power to pick up parcels through eminent domain and swap land with good ol' boys, all in the name of helping City Hall clear blighted slums.

The school district's public support for blight/EEZ has anti-blight groups worrying about deja vu. They plan to protest at Monday's School Board meeting.

"During public comment toward the beginning of the meeting, we will speak against EEZs," says Linda Green, a member of Citizens Involved and Invested in Columbia. She's asking other blight opponents to "please come and speak out."
Ironically, EEZ could significantly harm school budgets, by erasing up to 100% of a company's tax bill in a blight-designated zone. But that may not slow momentum building for blight support at CPS since Sessions took to the City Council dais.
Speaking as "a representative elected to represent the best interests of the Columbia Public Schools Board of Education," he almost gushed about the EEZ/blight proposal.   "The Superintendent and School Board have been made aware of everything being presented here," Sessions said. "We're behind this one hundred percent. This is a great opportunity! We see this as beneficial to Columbia Public Schools."
Anti-blight protestors will address the School Board meeting Monday, Nov. 12th, 6:30 pm, at the School Administration Building, 1818 W. Worley St.