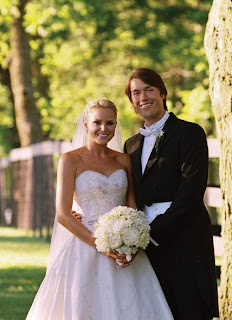 COLUMBIA, Mo 4/25/14 (Beat Byte) -- In news lighting up gossip columns around the world, Columbia native and Wal-Mart heiress Elizabeth Paige Laurie-Dubbert is both divorcing and suing husband Patrick Bode "Bo" Dubbert for allegedly stealing money from a shopping center they built and operate in Malibu, Calif.

Celebrity gossip site TMZ broke the story earlier this week, reporting Laurie accused her husband of pocketing some $70,000/month in unauthorized construction management fees on top of his $250,000 annual salary.

The pair tied the knot six years ago in one of Columbia's most extravagant -- and secretive -- wedding ceremonies ever, complete with an outdoor wedding tent designed to look like a gothic cathedral.

The grand niece of Wal-Mart founder Sam Walton, Paige Laurie-Dubbert is probably best known for a college cheating scandal that broke in 2004 after the television show 20/20 reported she had paid a roommate $20,000 over four years to write papers and do homework while both women attended the University of Southern California.

The scandal cost Laurie-Dubbert her USC diploma -- and naming rights for the Mizzou Arena, originally dubbed the "Paige Sports Arena" after parents Bill and Nancy Walton-Laurie donated $25 million toward its construction.
The Trancas Market Shopping Center in Malibu the couple owns has also seen its share of controversy.   Two thousand residents signed a petition to the Malibu City Council to block a tenant eviction from the market in 2011.   Late last year, Malibu resident and journalist Cindy Vandor took the couple to task for building an "illegal loading zone" at the market that added another danger to the already-hazardous Pacific Coast Highway.

Ironically, Laurie-Dubbert agreed to pay her husband "spousal support" for five years in a pre-nup should they ever split.