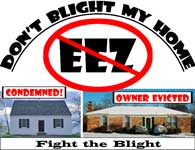 http://tomsager.org/Thumbnails/NoEEZ_150H.jpgGiving credit where credit is due -- 2012 Round Up, Part 1

COLUMBIA, 12/29/12 (Op Ed) -- About blight and Enhanced Enterprise Zones (EEZ), Columbia School Board member Darin Preis made an insightful comment at a recent Board meeting.  Opponents of blight/EEZ had done a better job than proponents did presenting their arguments.   In so saying, Preis rightly gave credit to a group -- average citizens -- Columbia's leadership is often loathe to acknowledge.

The many groups and individuals opposing blight/EEZ did everything proponents failed to do.  They gathered accurate, up-to-date census data, evidence, and other materials.   They discovered citizens in Rolla strongly opposed EEZ/Blight, catching Regional Economic Development, Inc (aka REDI) in a big lie:  that only people in Columbia opposed it.

Opponents cited EEZ's failure to launch in places like St. James and Phelps County; they brought in outside experts like Dave Roland and David Stokes to address the community with their own research and findings.  They gathered thousands of signatures opposing the measure from people all over Columbia and Boone County.

They founded groups like CiViC (Citizens Involved and Invested in Columbia) and People's Visioning and invited Council members to attend town hall meetings and presentations by government accountability experts such as Greg Leroy.

At the same time, EEZ supporters provided virtually no evidence to back their claims.   Instead, they presented an ad hoc, hastily-prepared program to the Columbia City Council in February, broadsiding Council members and the community.

The trouble continued when Council members passed blight/EEZ illegally as a Resolution instead of a City Charter-prescribed Ordinance, imposing it on Columbia without public debate or proper notice.  EEZ opponents cited the snafu, forcing city attorney Fred Boeckmann to publicly apologize and the Council to re-introduce the measure as an Ordinance.

Council members also tossed the Blight Decree that had been the EEZ backbone, only re-estabilishing the EEZ board.  So many opponents had come forward with hard facts that blight became a total misfire.

Months into the controversy, hundreds of people continued to protest, taking from our misguided leaders one of their most potent weapons:  name-calling.   Tribune publisher Hank Waters and other perennial name callers looked increasingly foolish labeling opponents "conspiracy theorists," "gadflies," and elements of the fringe.

Instead, the name callers were forced to look inward, at their own lack of care, like the undisclosed relationship between two EEZ Board members who were among Blight's most vocal proponents;  at Council members who supported blight/EEZ scolding constituents; or proponents using racist rhetoric that, in one instance, wrote off EEZ resistors as "a bunch of white people whipping up opposition among black people."

Darin Preis was right.  Opponents did a far better job making their case.  In Columbia and other communities, blight/EEZ seems headed for the political junkyard.  But a sad fact remains:  it took an entire town to overturn the work of a few uninformed men who occupy a taxpayer-funded perch smack in the middle of City Hall.

That kind of unfairness will only breed more disasters, and should be corrected posthaste.