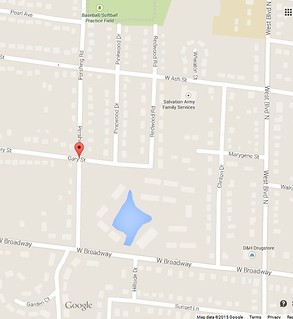 Neighbors in mostly single-family west-central Columbia are up in arms about the upshot of the so-called "West Central Neighborhood Action Plan":  "up-zoning," from R-1 single-family housing to R-3 and higher, ostensibly to accommodate student apartments.

"The idea of pushing people in there does not feel good," Casey Holmes, who lives on Gary Street, told reporters.  "We’d like to maintain the single-family area."

In January, I attended a City Hall-sponsored meeting to sell residents on the West Central "plan."

Like their Hubbell Street neighbors facing another student apartment Odleville, West Central residents are about to see Kenney's Law in action.   Named for Carl Kenney -- the Mizzou J-School instructor and Missourian columnist who described it -- there is no better statement about planning, zoning, and development in Columbia:

"Those with power and privilege make decisions, and then come to the broken for an endorsement."

Like a scientist drawing general rules from specific conditions, Kenney observes the dysfunctional power relationships between the white and black communities, then draws a bigger picture about how power disadvantages people without it.

Applied to land and real estate, Kenney's Law guarantees only the rich and powerful enjoy true and lasting property rights.  From officially-blighted neighborhoods to Odle-sized rezoning efforts, everyone else may lose their property rights at a moment's notice.

Like any scientific law, Kenney's Law also makes reliable predictions.  Prediction:  The West Central Columbia Action Plan will mean significant redevelopment.   Prediction:  "The broken" will be current residents asked to "endorse" the plan who lose property rights as the "decision" is made to rezone their streets.

Tract after agonizing tract, pressure will mount to sell out, as developers move in.   City Hall, meanwhile, will quietly withdraw support for the area's now-obsolete homeowners, indefinitely delaying things they want like traffic-calming street humps, sewers that work, and city approval for cozy coffee klatches and cute corner groceries.
Of course, it will all be done with that old familiar "we aims to please" smile, part of the ruse powerful, privileged types use when they seek "endorsements" from those they intend to break.

"The neighborhood planning process invites the diverse interests represented within a neighborhood to come together for the purpose of developing a shared vision," the City's website explains.   "Neighborhood plans support livable and sustainable neighborhoods as outlined in the Columbia Imagined Comprehensive Plan."