Lt. Colonel Mike Jones left Columbia, Missouri for several tours of duty in Iraq as a combat psychiatrist.   This is the story of his last tour, which did not end until last week, 4 years after it began.

Monday morning began much as Sunday for Jones, who walked from the cans to his office around 6:30.

Camp Stryker Chaplain Peter Keough telephoned, records say around 7:50 a.m.  “Dr. Jones, I have Sergeant Russell in with me,” Jones quoted the Army captain.  “He’s distraught.  He’s talking about harming himself.  We’ve disarmed him and consoled him, but I think you need to see him.”

“I have an opening at noon,” Jones told Keough.   The sudden turn of events prompted Jones to insist on a “command referral,” a formal order approved by the soldier’s commander.  Capt. Keough had little familiarity with it, so Jones emailed him the referral package at 8:34 am.

“This will save time...and be better for the soldier,” Jones wrote.  “He should come with an escort who will carry the paperwork.”  And to preserve the soldier’s identity:  “It’s okay for Sgt. Russell to have his weapon, as long as it has been disabled by removing the firing pin or bolt.”

After a “concerted effort” to make sure his other work was done, Jones again met Russell in the waiting room, where he was sitting disarmed next to another one-person escort, Staff Sgt. Enos Richards.  “I took his command referral paperwork and brought him back to my office,” Jones says.

Before they started the session, Jones read the referral, looking for comments from Russell’s commander.

“Usually they’re fairly explicit, but this one was sketchy,” Jones explains.  “It was only a sentence or two, mentioning that Sgt. Russell was talking about harming himself.   There was nothing I can remember about the unit climate or anything else that indicated what was motivating him.”

“Now do you believe I’m abnormal?” Jones remembers Russell responding.  “You need to help me get out of here!”

But discharging Sgt. Russell from the United States Army was not in Jones power.  “He seemed incredulous that I could not just wave him through,” Jones explains.

The stress clinic could help Russell if he would let them, Jones said, at which point Russell raised his eyebrows and assumed an “oh no, here we go again,” posture.   “This is bullshit!” Russell exclaimed.  He stood up abruptly, walked out of the office and down the hallway.

“Sgt. Russell, please come back to my office,” Jones said.

“I was done with the Army two years ago,” Russell shot back.   He went through the waiting room, past the receptionist, into the parking lot.  Jones followed.  The escort, Sgt. Richards, got to his feet. 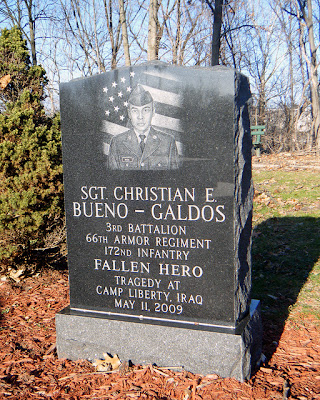 “Call his unit,” Jones told the receptionist.   He motioned to the escort, explaining the stress clinic had a “zero tolerance policy” for soldiers eloping from the clinic under circumstances like these, which included a formal command referral.

Jones and Richards went out to find Russell.  Barriers separated the parking lot from the clinic, so it wasn’t simply a matter of looking across an empty expanse.   A person could crouch behind a barrier, or collapse and remain unseen.

Fortunately, Russell was in plain sight, walking around the SUV that brought him, “sputtering with anger and disgust,” Jones says.   He approached, using his best “command voice.”

“Sgt. Russell—you’re just going to make your situation worse.  This isn’t going to help you.”

At a solid 6’4”, Russell was a big man, outweighing Jones by two or three dozen pounds, and towering over his 5’11” frame.  “I stayed about 10 feet back,” Jones says.  “I felt there was a danger he would attack me, but I also had to control the situation.  I gave him some room.”

Russell opened the car door and sat.  “I’ve been to three different doctors,” he said.  “One mocked me.”  He paused.  “Enough of this suicide game!”  He looked at Jones.  “Just send me back to my unit.  I want to go back to my unit.”

Two staff sergeants—Kathryn Pollock and Leah Gates—arrived.  Jones told them to work with MPs who would soon arrive and keep Russell at the clinic.  He went inside.  “I wanted to talk to Russell’s command, but I didn’t want to force him back into the clinic.”

With phone numbers constantly changing for security and logistical reasons, calling another command was no easy feat.  Though Jones had requested one for some time, his office didn’t have a phone, so he went to make the calls in a different office near the staff lounge, where a small crowd gathered toward the end of lunch was talking about the commotion in the parking lot.

While Jones was dialing, he overheard Charlie Springle tell Matthew Houseal in the lounge that Russell was the “guy I was telling you about who was looking for a diagnosis.”

“He who was looking for a diagnosis,” Springle said again.

“It was the first I had seen Springle that day,” Jones says.

Sgt. Pollock returned momentarily to tell Jones they let Russell return to his unit with his escort and that he was gone.  She didn't explain why Russell was allowed to leave, but before Jones could react, an MP approached him about a different case Houseal was handling.

Jones sent the MP to Houseal and returned to the phones, calling Camp Stryker’s chaplain.

“I told him we needed to use all resources possible to find Russell,” Jones says.  Then a phone rang in the OIC’s office next door.  The OIC—Officer in Charge—was out.   The receiver from Keough still in his hand, Jones reached through the connecting door and answered.

“Sir:  I just wanted you to know that Sgt. Russell has commandeered a weapon,” said a man who identified himself as Capt. Ake.  “We think he may be going back to hurt the people who were trying to help....”

Jones heard a single shot mid-sentence.  “I froze,” he says.  “The report was unbelievably jolting.”    Then more shots.   He moved away from the sound, through office connecting doors that kept him out of the hallway.   He came to a small recreation room at the other end of the building where people were crouched.  He kept going.

“I went out a window in the occupational therapy office,” Jones says.  “I saw Lt. Keener and another soldier ahead of me.   I followed the barriers around to the next building and told people there a shooting was going on and to call the MPs.”

Keener had done something Jones considered heroic:  gunfire and splinters bursting through wood panel walls, the Navy psychologist jammed a chair against the door, slowing Russell just long enough so that he and his soldier-client could slip out his office window.

Jones did not set foot in the Camp Liberty Combat Stress Center again.  For hours after the shootings, he stood with other survivors in 110° desert heat giving statements and waiting for a debriefing that never came.

"I thought they'd do a lengthy psychiatric forensics analysis, go through everything with a fine toothed comb," Jones says.  "But that never happened."

That night, Jones returned to the can that he shared with Matthew Houseal, who had served as a physician from the freezing Antarctic to the deserts of the Middle East.    Surrounded by Houseal’s personal effects—his clothes, his family pictures, faint smells that prompt powerful memories—Jones crashed, contemplating suicide himself.

A black Army chaplain from a Christian church in Wisconsin prayed with him and helped himthrough.

“Houseal and Springle were my friends,” Jones says.  “Charlie and I had gotten very close—we had a tremendous amount of respect for each other.  Matt Houseal was a man I lived with, day and night.  He left a huge, loving family behind, his wife and lots of children.”

Jones stops here, in tears.  He’s a stoic man, and it’s the first time during our eight hours of interviews that he breaks down.   He finishes with something about not killing himself because he didn’t want John Russell to claim yet one more victim.

Investigators cordoned off the stress center as a crime scene and split the staff into different groups.  To get himself back on the horse, Jones—whose three month tour was up in a few days—re-upped for another three months.

“Staffing was short until August.  I felt my unit needed me and I needed them,” he says.  “I also thought it would have sent a terrible signal had I left so soon after the killings.”