THE SHOW GOES ON: Hickman students power through frightening stage mishap to shine in Fiddler on the Roof

A marathon performance delivers riches of all kinds
COLUMBIA, Mo 11/23/14 (Review) -- A frightening stage accident could have derailed their final performance of Fiddler on the Roof.

But Hickman High School students Saturday night transformed the mishap into a display of theatrical professionalism -- and professional respect, for the young actress who fell roughly ten feet from her perch atop a moving prop that veered suddenly and unexpectedly off the stage.


Fiddler is the musical story of Tevye, a man who must temper his dreams of wealth and easy living with the desires and needs of his wife, his five daughters, and his peeps:  the poor Jewish residents of Anatevka, a Russian village on the verge of collapse, as the 1905 Russian Revolution and anti-Semitism -- a dominant force in Russian culture for centuries -- sweep the land. 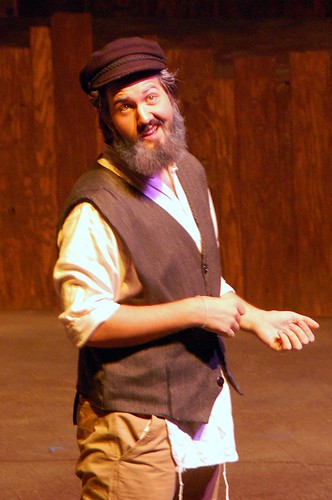 "If I were a rich man," Teyve (Will Fandek) sings with lusty gusto.  "I'd build a big tall house with rooms by the dozen, right in the middle of the town."
Fandek owned the stage throughout the nearly 4-hour performance, playing the scheming but good-hearted Jewish father with bombastic glee.

For Tevye, life is a balancing act between old ways and new that Fandek and a marvelously alive ensemble cast lay out early in the show.

"Tradition!" they sing, where the father chooses the grooms for his soon-to-be daughter-brides.  "Tradition!" where papa makes the rules, while wife and children love, honor, and obey.

But as Tevye reluctantly learns, a new generation is rewriting his beloved traditions, with a young student from the city, Perchik, played with fiery earnestness by Josh Friedrich, boldly announcing that the times -- they are a'changing.
If two people love each other, it is their decision alone that decides if marriage is in the offing, a revolutionary idea to Tevye that helps germinate a trio of love interests amidst the oldest of his daughters.

African-American actress Allegra Kerns plays the young Jewish girl, whose love for the very white -- and very Christian -- Fyedka (Ben Dolezal) challenges Tevye's world to its conceited but dedicated core.   How can he allow his daughter to marry outside the faith?

"She is dead to me," Tevye declares.  But Fandek's magical rendering keeps a certain gleam in the eyes of this complicated man, and so the audience has hope.

Hope, that all will be right in the end. 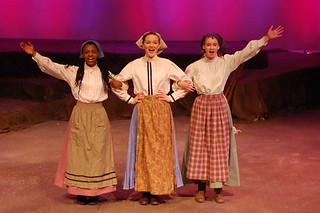 The musical ground to a halt about halfway through, at the end of a dream sequence choreographed to thrill.

Eerie apparition Fruma-Sarah, played by Colleen Cutts, glided into the bedroom of Tevye and his wife Golde (Myriah Araiza) to warn Tevye away from his latest get-rich-quick scheme:  marrying his oldest daughter Tzeitel off to Lazar Wolf (Malachi Gerke) -- the village butcher and Fruma-Sarah's widower husband.

"What is this about your daughter marrying my husband?" Fruma-Sarah asks, all ghastly like some Spirit of Christmas -- or in this case, Hanukkah -- Past.   "How can you let your daughter take my place, live in my house, carry my keys?   And wear my clothes, pearls, how?"

It's a show-stopping scene, as the ghost of the butcher's wife towers 8 feet in the air over Tevye and Golde, imploring that her memory be preserved as white clouds of stage smoke add shadowy effect.

It became heart-stopping as Cutts and the prop-master beneath her lavishly ghoulish get-up exited, falling off the stage to the hard tile floor with an audible "thump" as they tried to negotiate a sharp 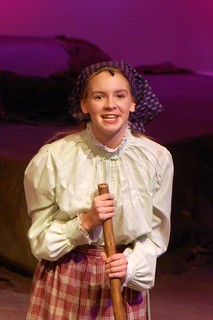 turn just behind the curtain.

Gasps swirled through the packed house, as cast, crew, and several physicians (fortunately in the audience) rushed forward to help.   Emergency crews arrived moments later, securing Cutts' neck to prevent injury and whisking her away, while the audience waited patiently outside the theatre for word of her condition.

It reassured that Cutts was laughing and smiling as the paramedics wheeled her to an ambulance.  Word was that she would be fine -- and that the show would go on, to honor her, all the hard work, and an audience caught short just as things were getting really good.

The show opened as a lion, the Fiddler of the title, Wenzer Qin acting as a kind of one-person chorus, guiding the lion -- Tevye -- with notes from her strings.   It closed as a lamb, a changed Tevye and his now much-reduced family -- three daughters are married, two gone from home -- leaving for America.

"If I were a rich man!" the fiddle quietly played.  The lights dimmed and the marathon musical closed its third night during its 50th anniversary year.

Director Sarah Gerling, choreographer Robin Beach Steinhaus, orchestra conductor Denis Swope, costume designer Shawn Huggans, and technical director Vicki Palmer had much to be proud of this night, as their cast, crew, and musicians brought a packed house to its feet, in a collective cheer for a wonderful performance -- and the meaning behind a famous adage of the stage.

The show must go on.

[From top, photos of Fiddler cast; Fandek as Tevye; Kerns, Casto, and Wagner as Tevye's daughters; and Wagner as Hodel credit Marilyn Cummins].