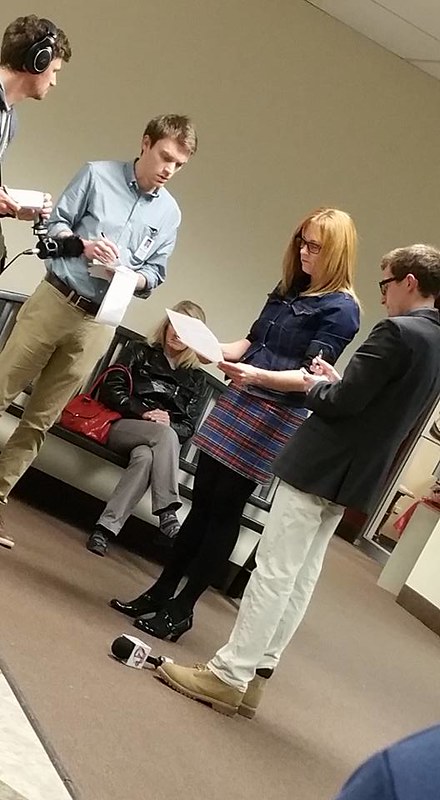 "It was shady.  And really, really weird."

Bi-partisan election judges were hired to count the votes.  The sales tax passed with a wafer-thin margin of four votes to three.

"I was at Parkade Center when the votes were counted.   It was shady," said Mark Flakne, who directs liberty advocacy group Keep Columbia Free (KCF).   "CID employees and attorneys were in the counting room with election judges.   Gartner -- whose $70,000 annual salary depended on the measure passing -- was in the room.   I went to the glass door of the room and watched her hand out paychecks to the election judges."

Watching the count with Columbia residents Michael MacMann and Jennifer Henderson -- who has filed a lawsuit alleging the election was a "sham of unprecedented magnitude" -- Flakne posted a minute-by-minute timeline on KCF's private Facebook group.

"The election officials kicked the public observers out of the counting room," Flakne noted Dec. 10, 7:03 pm.   "Now, they just let Carrie Gartner in."

A comedy of errors parodied in this publication, on the Daily Show, and elsewhere has plagued the Loop CID since its board of directors attempted to gerrymander all eligible voters out of CID boundaries, handing sole control of the tax process to business members.    Journalists and election officials later found Henderson and 13 other area residents registered to vote.   Gartner announced one more voter, bringing the total to 15.

Henderson has criticized the sales tax -- which will hit grocery stores like Aldi's and Moser's -- for its disproportionate impact on low income residents who live near Hickman High School and the Business Loop.   Gartner came under fire for trying to persuade Henderson to "un-register" from voter rolls.  “That's pretty manipulative,” Henderson told reporters.

Flakne's Facebook timeline of the vote count, with comments from Henderson, continues below:

Mark Flakne    Carrie just went in and handed out checks to all of the judges.
Like · Reply · December 10 at 7:25pm

Mark Flakne     Two ballots should have been returned.   What happened to the other ballot?
Like · Reply · December 10 at 7:43pm · Edited

Mark Flakne     The woman whose $70k salary depends on the tax hike being approved was allowed access to the counting room twice.    The second time she handed out checks to election judges.
Like · Reply · December 10 at 9:18pm · Edited

Mark Flakne      The other weird thing was that after Carrie was summoned in to pay the vote counters, she emerged and announced the results.    No official statement came from any public official.   It was really weird.  Really, really weird.
Like · Reply · 2 · December 10 at 11:18pm

Jennifer Henderson     I didn't even think about that Mark.   What an interesting noticing.
Like · Reply · December 10 at 11:24pm

Jennifer Henderson    More of us should have been able to be present during the counting.
Like · Reply · 2 · December 10 at 11:27pm