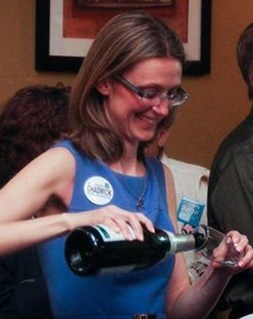 Like a "celebrity", bowing out of "this ridiculous recall"

With help from the 3-person voting bloc with whom she often aligned herself -- Mayor Bob McDavid, Council members Laura Nauser and Michael Trapp -- Chadwick's swan song seemed a singular failure to understand just how deep has been the discontent with her representation.

Multiple groups banded together to recall her, submitting a successful petition for an April 7 vote that will now be for the open First Ward seat.

"Many real leaders in Columbia have reached out to me to tell me how ridiculous this recall is and offer their support," Chadwick began.   "I stand firmly behind every decision that we made and feel that I was a part of great leaders moving our city forward."

Emphasizing that she did not vote in a vacuum, Ms. Chadwick told the audience at last night's Council meeting she used her power to "uphold the laws we have in place, and to not put in place laws that we couldn't uphold, despite the group of citizens angered by our actions."

Ms. Nauser overstated Chadwick's constituent service and understated citizen dismay with it.   "I will say that you have represented your Ward," Nauser said.   "We cannot please every citizen in this community and there's always going to be those who dissent with what we decide to vote for.   I think again that you have represented the First Ward."

Forgetting the primary controversy -- his outspoken support for Blight -- that dogged Chadwick's predecessor, Fred Schmidt, the Second Ward's Trapp chalked her predicament up to a circumstance beyond her control -- the First Ward's intrinsic unruliness.

"It's tough to serve in the First Ward," Trapp said.  "I know with Mr. Schmidt, it took a large personal toll on him.  It's unfortunate that sometimes the process can be personally painful."

Likening the plight of Council members to the plight of celebrities, Trapp urged the public to "carry on with a certain amount of decorum.  Sometimes with we City Council members, it's like we treat all celebrities or public figures.  We talk about them like we know them and we judge them harshly and we say things at their expense."

Mayor McDavid concluded with a shot at the thousands of people who signed two petitions against City Hall's support for the controversial Opus student apartment downtown.  Chadwick led the charge for that support shortly after her election.

"On my death bed, I will never understand the urge to preserve an asphalt parking lot," McDavid said, referencing the Opus construction site.  "Columbia is a better place because you served on the City Council," he told Chadwick.  "I think history will serve you well, and I hate to see you go."

The other three Council members -- Karl Skala, Barbara Hoppe, and Ian Thomas -- thanked Chadwick for her service and wished her well.