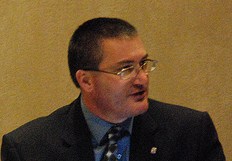 COLUMBIA, Mo 5/12/16 (Beat Byte) -- In stunning public admissions about 18 months ago, City of Columbia development services manager Patrick Zenner told an audience that City Hall had "failed" to serve the public in its oversight of downtown student apartments.

"We've failed you, and I admit it," said Zenner, who oversees large construction projects for the city's Community Development Department.

"Our failures have left carnage at the edge of your neighborhood," he told members of the North Central Columbia Neighborhood Association (NCCNA), which represents the area around Columbia College next to downtown.

Zenner was responding to questions about the Odle family's Brookside Apartments on Walnut Street that overshadow -- literally -- several blocks between Orr Street and College Avenue.    Butted up against the street, the apartments have created traffic and pedestrian snarls since their construction.

Repeating the word "failed" several times, Zenner cited the city's failure to insist on good planning; failure to communicate and listen to neighbors; and failure to follow what few plans do exist in the rush to build thousands of student apartments.

Zenner made the remarks at a Sept. 2014 "Neighborhood Congress" at the Columbia-Boone County Health department.

The neighborhood planning process Zenner and fellow department member Bill Cantin described was littered with red flags, starting with Zenner's opening remarks that the central city "has the most potential for redevelopment."

"When my neighbors see city manager Mike Matthes telling the newspaper what he plans to do with the Ameren site, it really pisses us off," said former NCCNA president and Downtown Columbia Leadership Council member Pat Fowler.

Matthes -- who said he wants to use the city's "extra cash" to buy the vacant site across from Orr Street Studios -- hadn't consulted any neighbors, Fowler explained, and has "no idea" what a neighborhood-driven plan for the area -- in the North Village Arts District -- "would look like."

Zenner said he understood Fowler's concerns, and that city planners would "definitely work with the public" to develop an Ameren site plan.   His words were passionate, almost breathless at times, as he pled his case before the skeptical crowd.

"Deputy city manager Tony St. Romaine just accepted a consultant's report that did nothing but badmouth the central city," this writer told the planning staff.

From St. Louis-based Development Strategies, the report labeled much of the area a "menace to the health, safety, morals, and welfare of the public," under Missouri law the first legal step toward the use of eminent domain and developer tax incentives such as TIF.

"Why all the bullseyes?"  I asked.   Zenner dodged the question with biographical details.   "Greed" turned him off to his former career in private development.

"I didn't just want to do this for the profits," he said.      Neighborhood planning, he concluded, will require "a commitment from everyone.  Without you, it won't happen."
-- Mike Martin.  An earlier version of this story appeared in September 2014.