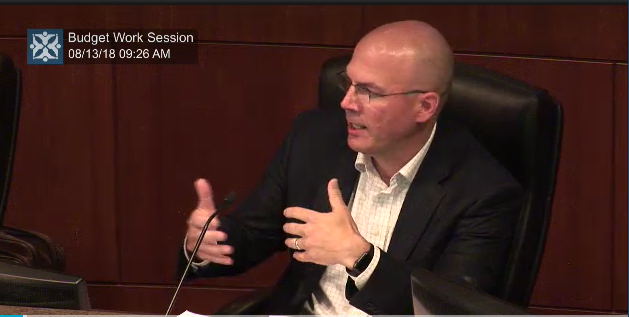 They should give the process two more weeks and one more public hearing before the October deadline.

Thereafter, they must, as a matter of ethical public service, start the process months earlier, maybe in March or April, before people leave for summer vacation and school breaks. Fourth Ward Councilman Ian Thomas won't be at this evening's meeting, either, while the city treasurer, auditor, and finance director positions are all vacant.

Hustling the city's most important annual act through three or four summer meetings is an invitation to the kind of bullshit Council members seem to be uncovering around every turn. Matthes' dire annual predictions of declining sales tax revenue cuz Internet are Exhibit A. 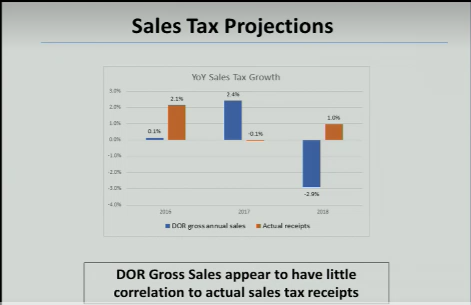 "We're projecting something that has never happened before," Pitzer said.  "That surprises me."

Four baloney-busting charts Pitzer made (pictures) showed sales taxes UP here and around Missouri, a trend likely to continue. His detailed presentation also showed how little Council members understand sales tax collections, and how Matthes and his staff manipulate their ignorance. 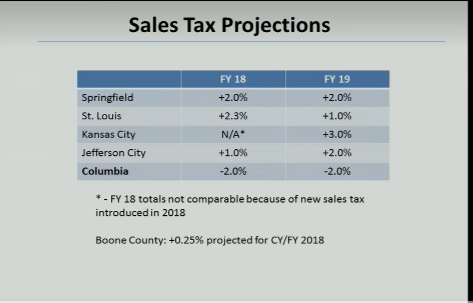 "How did you come by those numbers?" he asked.
"We receive a report from the Department of Revenue," Matthes replied.  "They tell us each month what we have.  At this point, in this year, that is a negative number."


"It doesn't seem like the reports from the Department of Revenue are very predictive," Pitzer said. "The prior two years, it doesn't appear we used their results to make projections."
"It's one of the tough things we do in finance. Estimating one or two years out," Matthes said. "There's this disconnect between what we're seeing and what we predict and then what happens."

"The numbers haven't been shown to be very reliable in the past, nor have we used them to make predictions, it doesn't seem like, in prior years," Pitzer repeated. 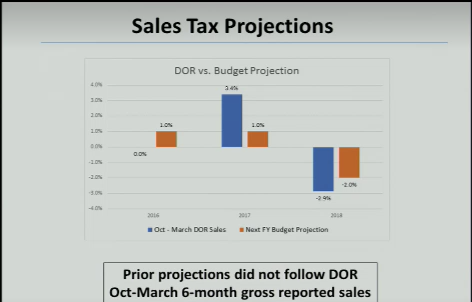 "That's what going on across the state," Pitzer said.

Nix came back with her mystery money argument.
"When we receive money from the Department of Revenue, there could be additional funds in there over and above what we would receive for the sales during the month, based upon protested payments that may have been released, or delinquent taxes that got paid, and we could have additional payments that are unpredictable," she said.

Thomas asked if the three million dollar mystery money check was in Nix's calculations.  Her answer was pure baloney. 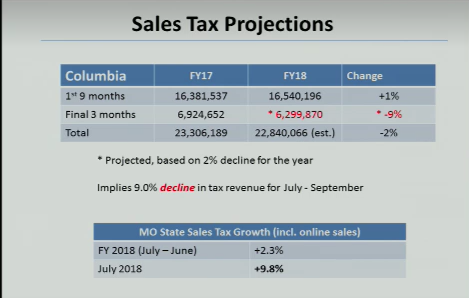 "I wouldn't think so.  Maybe," she said.  "The letter that they gave us about it is a little nebulous, actually."

"You're not following up on that?" Thomas asked. "It would be good to know why."

"Well, when the Department of Revenue gives you three million dollars..." said Nix, who quit earlier this month.
The Columbia City Council needs to shut down these operators called administrators.

They are destroying this fine city, bit-by-bullshit-bit.
-- Mike Martin