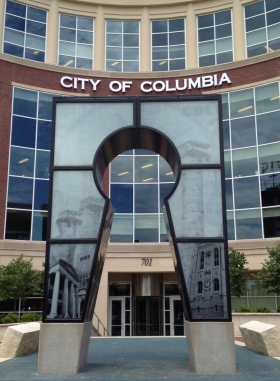 Swiss bank account cited
COLUMBIA, 3/5/18 (Beat Byte) -- The Columbia Police Officers Association has joined the Columbia Board of Realtors requesting the City Council ask Missouri State Auditor Nicole Galloway "for a full and complete audit of the books, records, holdings, and finances of the City of Columbia, Missouri."

The organization -- which represents most Columbia police officers -- cited the city's notorious Swiss bank account as a source of concern.

The account, at the Union Bank of Switzerland (UBS), had a balance of $321 million as of September.  The figure is up over $20 million from 2016.  It has nearly tripled, from $110 million, over the past twenty years.

CPOA members partly blame the failures of last year's Internet "use tax" and the 2014 property tax for cops on the city's massive Swiss bank holdings.

"As long as it appears the city maintains over three hundred million dollars in a Swiss account, the citizens might find it difficult to believe the city is in need of additional revenue," the group wrote to Mayor Brian Treece and the City Council.  "CPOA repeatedly hears from our supporters that the voters are hesitant to support any new taxes."
Another common thread in city finances -- that City Hall always finds the money for its own priorities -- rankles the CPOA membership.

"The City Council voted to spend 1.1 million dollars to purchase additional land for Flat Branch Park," the group wrote.  "This, too, has generated public concern over the city’s ability to be a good steward of the resources given it."

Only an "external, impartial audit" will resolve both CPOA and public doubts about the city's financial situation, their letter concludes.   Council members take up the matter at tonight's meeting.