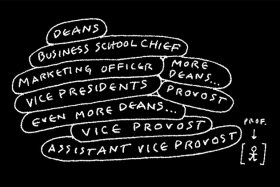 $144.5 million for MU deans, provosts, chancellors, and the like
COLUMBIA, 2/13/17 (Beat Byte) -- "The budget is broken," newly-elected Governor Eric Greitens pronounced, cutting $40 million from the University of Missouri.

But who or what broke it?   And how can it be fixed?

In higher education, many experts blame administrators and say cutting their ranks is an excellent start.

Across its four campuses, University of Missouri administrators earn about $105 million annually, an amount it takes 10,500 students at $10,000 each in tuition to pay.

Mizzou administrators in Columbia account for $68.4 million of the total, according to the 2016 MU salary database released in November.

Salaries of upper-level leaders jumped 6.7% or $4 million systemwide between 2015 and 2016.
Funded through athletic departments, coaches at the four campuses earn a collective $13.1 million ($9.9 million at Mizzou).
Adding roughly 38% for benefits and employer Social Security and Medicare contributions brings the 4-campus administrative total to $144.5 million.
Mizzou administrators make up roughly 16% of the $366.2 million budgeted for employee salaries (not including coaches) during the 2016-17 fiscal year.
Nationwide, the AIR study showed the number of administrators and staff who neither teach nor conduct research at colleges and universities more than doubled between 1987-2012.

“In no other industry would overhead costs be allowed to grow at this rate—executives would lose their jobs,” Bain & Company analysts wrote in a 2012 white paper about higher ed administrative spending.

Student populations, meanwhile, grew at half the rate of administrators, while full-time and tenured teaching faculty have seen their ranks reduced by nearly 17% in the past 30 years.    Making up the difference:  part-time faculty and teaching assistants, who now account for half of all instructional staff at US colleges and universities.

Footing the bill are tax dollars at public institutions; tuition and fees at all institutions.
Adjusted for inflation, tuition and fees have doubled at 4-year private universities and colleges; tripled at their public counterparts since 1987.   Excepting tobacco products, tuition and fee hikes have outpaced every other economic sector, including insurance and healthcare.

But if history is any guide, cost-cutting will mainly fall to faculty and lower-level staff.

"A university president will say, ‘We’re making moves to cut costs,’ and mention something about energy-efficient lightbulbs, and ignore the new assistant to the assistant to the associate vice provost they just hired," Richard Vedder, an economist and director of the Center for College Affordability and Productivity, told the Huffington Post in an interview about the AIR report.

Proponents of increased administrative spending in higher ed blame government regulations such as those that guide student aid; and non-academic priorities such as marketing, diversity, sustainability, security, environmental health, recruiting, and athletics.

Higher ed building booms have also boosted admin costs, as billions in construction of new stadiums, libraries, dormitories, recreation, offices, and conference facilities prompt hiring of more managers.
Regardless the reasons, is all this admin spending helping students?    U.S. Department of Education numbers say probably not.   Only 58% of bachelor's degree-seeking students graduate within six years, up just 3% from 2002.

With listless stats like those, "even schools with average administrator-to-student ratios could stand to see major cuts in their administrative staffs and budgets,"   Johns Hopkins University professor Benjamin Ginsberg concluded in Administrators Ate My Tuition for the Washington Monthly.     "A 10 percent cut in the staff and management ranks would save millions of dollars, but have no effect whatsoever on the operations of most campuses."
Links in story provided for further background information.  Illustration credit:  731 stock.