IF I WERE THE DONALD: What I would have said about immigration and immigrants 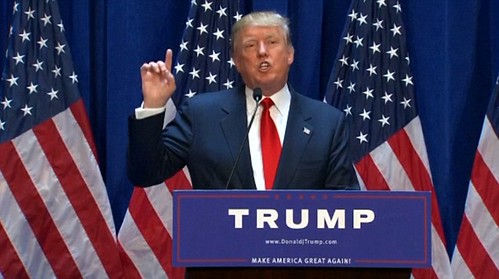 We Can Do This, America

COLUMBIA, Mo 7/4/15 (Feature) -- Donald Trump is in hot water over intemperate remarks he made about Mexican immigrants, painting them with a broad brush of negative stereotypes.   On this 4th of July 2015, here's what I would have said if I were The Donald, a Republican Presidential candidate:

That may surprise many of you, that our great nation has a great humanitarian crisis, but it's true.  It's true because even with our broken system, thousands -- millions -- of people from virtually every country imaginable still come here to find a better life.  Still see in us -- US, the U.S. -- what did Reagan call it:  that "Shining City upon a Hill."

Still see in America the chance for not just a full stomach and a good job, but for real prosperity, for a better future, not only for themselves but for their children and their children's children, and their families back home.

I'm worth $9 billion -- I think I've told you that before -- and I want you to know that every dollar of that nine billion represents a piece of the American Dream, the same dream I want to share with the rest of the world.

When people are prosperous, they're peaceful.  They're much less likely to commit crimes, wage war -- or terrorism -- on their neighbors.

And I will tell you, in all honesty, that a minority of immigrants -- from all over the world -- are active offenders.  They have committed heinous crimes -- rape, murder, serious drug offenses, even terrorism.  They aren't good for their countries, their people, or our country.

But because our immigration system is so screwed up, we don't have an effective, just way to deal with them.  Our leaders instead twiddle their thumbs, mostly because in our employment system, immigration that happens in the shadows is good.

Our government -- despite all its talk about the need for good jobs -- has made it so damned hard to employ people legally, that it's much easier to have a pool of people who can be employed illegally.   Who can be paid far, far less than the minimum wage.  Who, when you hire them, don't bring twelve taxes -- taxes with names like Social Security and Medicare and unemployment and withholding -- through the door of a 12-person business.

Illegal immigrants also get no benefits -- no health insurance or retirement plans.

And what about all the laws that regulate employment?    Illegal immigrants aren't regulated, and they're either too afraid or too uninformed about our laws to complain if something like worker safety or overtime rules are violated.

So employers, large and small, have an incentive to hire illegals -- a BIG incentive.

On the other side, what's the incentive for a person to immigrate legally?   I've heard it can take freaking ten years to become a legal U.S. citizen, mostly because our immigration system has become a full employment act for politicians, bureaucrats, and lawyers!

In short, our Shining City on a Hill has helped create the Shadow Economy of Illegal Immigration, an economy we must bring out of the darkness and into the light.

By zeroing in on the powerful special interests, both here and abroad, who are profiting -- unfairly and enormously -- from good people who come to America for a better life, only to find themselves caught up in another humanitarian crisis.

I will pull Big Government and Big Business off the backs of these good people, and in so doing, I will make getting a good job or starting a business or succeeding in a lifelong career easier for all Americans.

And if the foreign governments and one percenters from America to Mexico to the African continent who also benefit from this humanitarian crisis don't cooperate, I'll hit them where it hurts the worst -- in the pocketbook.

There's no need to build a wall around our Shining City.  We've sent men to the Moon, missions to Mars, iPhones around the world, and with tools that would be considered primitive today, built the Golden Gate Bridge, Mount Rushmore, and my favorite place on Earth, New York City.

And when we match big humanitarian crises like slavery and segregation with great leaders like Abe Lincoln and Martin Luther King, we solve those problems.

And we do it all with generations of immigrants.  As your next President, I promise you:  we will fix this train wreck of an immigration system and end the humanitarian crisis it has helped cause.

I promise you:  We Can Do This, America.