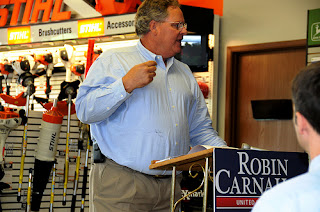 Southern District Commissioner Fred Parry is leading the charge to move a Columbia Parks sports venue planned for south of town to the Fairgrounds north of town.

Doing so would commit city funds to the County's failure, which started with public opposition to the land's $2.6 million price tag nearly 20 years ago.

The County's purchase of the Fairgrounds from a bankrupt non-profit is widely credited for ending the political career of three-term County Commissioner Don "Donnie" Stamper (above) who championed the deal despite blowback from members of his own administration.
The opposition started months before County government completed the purchase in October 1999.  "Scott Orr, a Columbia lawyer, urged the Boone County Commission to take more time in deciding whether to purchase the fairground property," the Columbia Daily Tribune reported in June of that year.

Orr worried Commissioners didn't even have financing.  "I think the financing should be in place before they make the decision," he said.

At hearings about the purchase, members of the public reiterated Orr's theme:  "Slow Down."

The Fairgrounds purchase is "being rammed down my throat," said Ashland resident Al Judy.   "To me, it looks like we are trying to bail somebody out."

Hartsburg resident Kristie Hilgedick -- a career journalist for newspapers in Columbia and Jefferson City -- questioned the County's priorities.    "I just see needs in our community that are more important than ball fields," she said.

But Fairgrounds boosters disagreed.   Fair board president Vicki Russell, wife of Tribune publisher Hank Waters and associate publisher, "took exception to the idea that the decision has been hasty and said further delay could lead to a loss of the fair," her newspaper reported.
Shortly thereafter, a Fairgrounds opposition group -- Boone County Citizens for Good Government -- took County government to task over several issues, starting with an appraisal they called inflated.

Group members claimed the Fairgrounds was worth $800,000.  But Stamper insisted the County pay $2.7 million (utlimately settling on $2.6 million) -- and $55,000 yearly for upkeep.  "Paying that amount for something that is going to sustain a loss doesn’t make a lot of sense," Greg Steinhoff, president of the citizens group, said.

As opponents' questions sunk in, Stamper -- known as the official architect of the deal -- admitted "the County would have a hard time making money promoting and renting the facilities" for anything more than the annual County fair.

"Stamper has no specific plan," Waters wrote in a June 1999 editorial.   "The value of the land itself is not as much as the debt on it.  Legitimate doubts are being raised about the deal."

Oddly enough, Waters still supported it.  "Arguments for going ahead are obvious."

But those arguments -- mainly that the County would have a permanent home for the annual fair -- failed to persuade critics.  "The Boone County Commission got a white elephant when it bought the Boone County Fairgrounds," Boone County Citizens for Good Government told the Trib.

"I think this is absolutely just an irresponsible purchase, and contrary to what the public was told for several months in the public hearings," said group member and local banker Sharon Lynch.   The group also charged cronyism, claiming fair board members contributed heavily to Commissioners' political campaigns.

"This is Republicans trying to tear apart the issue without regard to the facts," Stamper said at the time. "There is an election coming around the bend.  They destroy the institution so they can take control of it."

But Stamper's words proved hollow, as the larger, mostly-Democrat public voted him out of office in favor of Republican Keith Schnarre.   More ironic still:  Stamper turned away from the Democratic populism that had made him a rising party star to join developers swirling around the Fairgrounds project for reasons just now becoming clear.