PILLAR OF STRENGTH: After cancer and lung disease take toll on her parents, CoMo teen asks community for help 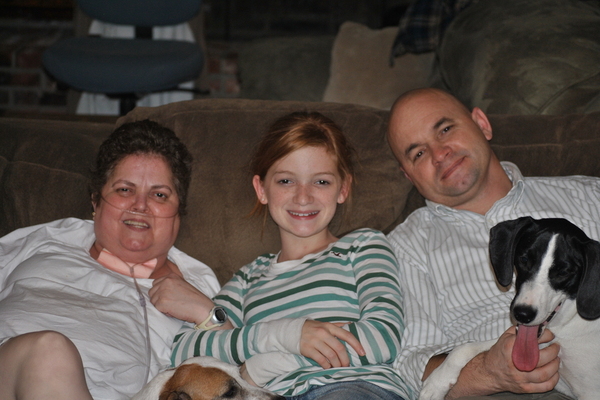 COLUMBIA, 11/11/12 (Beat Byte) -- A fifteen-year-old Columbia girl with two critically ill parents is asking for help on a well-written blog that describes the medical science -- and enduring human spirit -- behind her family's ordeal.

Jodie Bappe's mother has a deteriorating lung condition; her father, a Marine Corps veteran, was just diagnosed with cancer.
"For 18 years, my mom has had a lung disease called interstitial pulmonary pneumonitis -- an auto-immune disorder that attacks the lungs as if they were a germ," writes Bappe, an honor roll student at West Jr. High.  "In June 2012, my dad was diagnosed with oral cancer.  I didn’t really process this until weeks later when he started chemotherapy and radiation treatments.  I mean, my dad was a Marine; he’s tough. But chemo is tougher."

Both parents out of work, Bappe has taken to a fundraising blog called Indiegogo, where donations so far have exceeded her modest $3,500 request by nearly $1,000.    Bappe thanked her donors last week while updating them on her mother's condition.
"Mom was rushed to the hospital in an ambulance because she couldn’t breathe," on Tuesday, Oct. 31, Bappe explained.  "She stayed in the intensive care unit until Sunday (Nov. 4) and is now trying to rest and recover."

Persistent, flu-like systems first alerted Bappe's mother that something was wrong with her lungs nearly two decades ago.
But her condition mystified doctors, who didn't diagnose the lung ailment until 50% of her breathing capacity was gone, Bappe explains.  A biopsy at the Mayo Clinic turned up interstitial lung disease, a chronic condition with several causes that affects spaces around and between air sacs, restricting the ability to breathe.

"I have known that my mom is sick from as long as I can remember," Bappe writes.  "But she wasn’t that unhealthy until I was about seven or eight years old, and my brother Josh was ten.   Since then, my brother and I have been getting ourselves up in the morning and to school.   Since I was 12, I have had to cook dinner, balance my schoolwork and take care of all my mom’s needs."
Bappe's mother eventually stopped working as a hospital secretary, leaving sole responsibility for the family bills with her husband.  "My dad was at work 12-14 hours every day, an hour away from home," Jodie writes.
Her father's oral cancer diagnosis, meanwhile, has restricted his ability to work.   It was a grave part two of their most trying year ever, as her mother's lung condition reached a frightening new low.

"In September 2011, we had the biggest scare of our lives. My mom almost died," Bappe writes.  "When we got to her hospital room, I went numb.  She looked awful, with all the wires and IV tubes hooked up to her, pale and shaking.  It was the middle of the night but I could not sleep."

Doctors advised the family that permanent breathing assistance was in the offing, and that if an infection or other complication developed, they would have to decide "whether or not to turn the machine off."

"Right there. Clear as day," Bappe writes. "My world: shattered.  I could not breathe, could not blink, could not cry."

But after several weeks on a ventilator, her mother left the hospital and came home.  "Doctor after doctor told us she wasn’t going to make it. But my mother, the strongest person I know, pulled through and got off the ventilator."


Bappe's father isn't fairing as well.  Since August, he has lost 40 pounds, she writes.  "His skin is discolored, especially his neck, where the radiation was centered.   All the time, he is nauseous, sore, and exhausted.  We are just waiting for him to recover."

But the wait may be long, and with bills piling up, Bappe says her family has been struggling.  She and her brother Joshua -- another long-time honor roll student at Columbia Public Schools -- are the last two pillars of strength.

A technology innovator, Bappe recorded a faux ABC 17 news segment (above) for a school project about the novel Flowers for Algernon, which later become the movie Charly, the story of an earnest man who overcomes difficult times of his own with the help of people who believe in him.   Bappe hopes her second tech project -- the online fundraising appeal -- will plant similar seeds of hope.

"I need my parents to get better," she says. "Some part of me is very mature.  But the other part is still a little kid, who needs the protection and the care of two loving parents."