COLUMBIA, Mo 1/19/14 (Feature) -- A Columbia attorney who once sued a caterer for serving pork instead of beef has filed suit against this publication and two other people for allegedly miscasting him as a "tree mutilator."

In court papers filed Wednesday, Aaron Widel Smith claims an editorial entitled "TREE TRAGEDY:  When a falling ax is a good reminder," falsely implied that he has "no care or compassion for his community or its natural aesthetics," sparking a "neighborhood rally" against him that included people "shouting unsolicited, negative comments" from the street.

The court papers -- which have yet to be served on this defendant -- somehow made their way to Columbia Daily Tribune reporter Andrew Denney, who notified me about the case Friday afternoon.   Beneath Denney's story Saturday morning, Mr. Smith compared the Heart Beat editorial to a child molestation allegation.

"Let's say I drove by YOUR house and saw children playing in YOUR front yard.  From there I developed the unilateral opinion that YOU must be a child molester," Smith wrote.   "I then publish an article about how YOU are probably a child molester with all those kids in your front yard....People then start walking by your house throwing rocks at you because they now think you are a child molester....Would it be okay for me to do this even if I was a bad journalist?"

The Heart Beat editorial did not name Smith, but did identify his roughly 2.5 acre property at 802 W. Stewart Rd., a prominent Columbia estate built ca. 1910 he purchased last May.   Though the editorial was mostly about the Heart Beat mission statement, it did express negative opinions about what people could see from Stewart Rd., one of the city's most well-traveled streets.

What they saw was Miller's Woods, suddenly and strikingly laid bare.   This writer said it looked like a brontosaurus had feasted on the trees.  Stumps, trunks, limbs, and branches lay around the front yard, where a large backhoe has been parked for some time.
Miller's Woods took its name from C.B. and Helen Conley Miller, a prominent Boone County couple who built the Miller Shoe Company in downtown Columbia.  C.B. Miller had timberland around the county, as this 1918 article from The Country Gentlemen describes.   Family homes included the historic Sanford-Conley House, about which Mrs. Miller is listed as the owner while living at 802 W. Stewart. 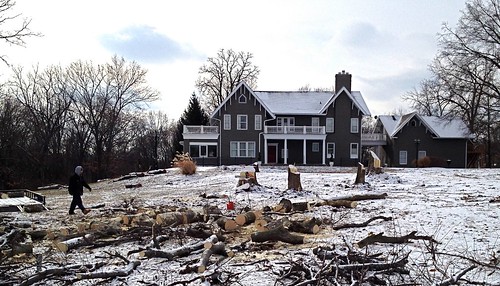 Ironically, the Heart Beat editorial's primary focus was Mr. Smith's right to do whatever he wants with his property, no questions asked.
But no questions asked is not the same as no opinions rendered.  And by taking down the trees, Smith opened the property even more to public scrutiny.
Also ironic:  many of the online comments came down firmly in Mr. Smith's favor, while labeling his landscape critics "snarky, nosy neighbors."

Smith started removing the trees on December 1, he claims in the court filings.   This writer first heard about them on Dec. 5, in an email from a neighborhood association leader expressing alarm at the sight.

Days after the Jan. 3 editorial appeared, Mr. Smith came forward, identified himself, and commented on the story.   In a follow-up Heart Beat piece taken from his comments, Smith explained he removed the trees because they were dying and diseased.

"Since we were taking out the old dead, dying, and diseased trees in the front anyway, I decided to relocate the driveway to the center of the house," he wrote.   "I expect to have children soon someday and I certainly would love for them to enjoy a safe yard."

Smith did not mention the Columbia City Council had subdivided the original lot in February, creating two smaller lots:  one with the main house facing Stewart Road; and a second facing Greenwood Ave.

County records indicate Smith deeded over his interest in the second lot last May, which would require moving his present driveway on Greenwood Avenue to the front of the house on Stewart Road.   The Greenwood-facing lot has been sold to another party.
The house is also listed for sale through Columbia Real Estate, where Mr. Smith is a broker-owner.

A high-profile personal injury attorney who often publicizes his awards and charity work, Mr. Smith may be best known in Columbia for constructing an office at the corner of Stadium and Broadway that became the center of neighborhood contention over its size, location, and lighted sign.
Complaints led Council members to place a moratorium on similar signs in 2012 which it renewed last year.   The year-old building is so well-known that someone created and maintains a Wikipedia entry about it, describing Smith as a "lawyer and philanthropist."

Smith has also taken the media to task before, criticizing Columbia Daily Tribune business reporter Jacob Barker for "making light" of a $10,000 lawsuit he filed against Columbia Catering Company and Anita Bible.

The 2011 suit alleged Bible "fraudulently induced Plaintiff to pay $450.00 to purchase catering services and a meal which was promised to consist of Beef Tenderloins which in fact consisted of Pork Cutlets."

"Journalism ethics require truthfulness, accuracy, objectivity, impartiality and fairness," Smith wrote about the Trib story.  "You were not incited by these ethics in your coverage.   Clearly, the opening, 'Where’s the beef,' was the punch line for your joke."
Mr. Smith was awarded $552.54, court records indicate.