STUMPED: Can the economy and the environment coexist in CoMo? 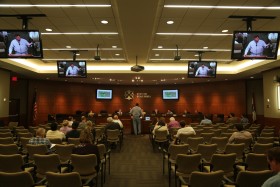 by Matthew Schacht, special to the Columbia Heart Beat

COLUMBIA, Mo 11/7/13 (Feature) -- In the next 20 years, city planners estimate Columbia will require 19,000 new residences.
With the 2010 census showing only 3,693 vacant homes, new construction should be a priority, says Don Stamper, executive director of both the Home Builders Association and Central Missouri Development Council.  "There's high demand for new housing," he explains.
But city environmental regulations, he warns, could aggravate the housing shortage.  "The housing market is picking up, [but] we're not always a development-friendly community."

A pending revision of Columbia's tree preservation ordinance may come across as development unfriendly.   Chapter 12A-48A of the municipal code identifies how many and what kinds of trees a developer must preserve on a parcel.  The city passed the ordinance in 1991, after developer Ron Westenhaver bulldozed a highly-visible, old growth forest off Forum Boulevard for an office complex called The Colonies.

"The tree issue wasn't that much of an idea back then," Westenhaver says. "I started doing this in 1961, back in the days people came in with bulldozers [and] just laid open [the land] and cleared it down.  If there was going to be a tree, they planted it between a sidewalk and a road."

Westenhaver bulldozed a forest of oak and hickory in a single weekend, angering residents and triggering an outcry for tree preservation legislation.  "Some people didn't like what we did, but that's part of developing," he says. "We were doing our job."

Two decades later, Aspen Heights developers clear-cut trees at the old Columbia Regency trailer park.  After a city investigation concluded they did not violate the law, Columbia City Council members asked city staff to review the tree preservation ordinance.
Plans to revise it have since emerged that may spark a battle between developers and conservationists, says city arborist Chad Herwald. Herwald is advocating stronger legislation he knows will cut into developer profits. "They sell commercial property by the square foot, so think about it," he says.

The root system of a mature oak can take up an acre or more. Commercial property values in Columbia range from $20,000 to more than $1 million per acre, according to Plaza Commercial Realty. A change in the law requiring even slightly more tree conservation could cost tens of thousands of dollars.

It's a potentially significant hit developers -- already "touchy" about money post-recession -- won't take, says Westenhaver, who moved to Osage Beach years ago. If City Hall is not careful, "it will add a law that prices them out of the market," he says.

Unapologetic about increasing costs, Herwald recommends closing loopholes in the tree ordinance, including one that allows developers to count trees "saved" in utility corridors toward total tree preservation.

By law, developers must preserve at least 25% of climax forest on a parcel.  Trees in a utility corridor are frequently cut down or cut back to install pipes and electrical lines.  Developers who keep them can count the utility corridor toward the 25% requirement, while saving valuable land for building.

The loophole emerges when utility workers, often years later, cut down the "preserved" trees for maintenance, Herwald says.  At that point, the ordinance has failed.

Despite their concerns of falling profits if trees remain standing, conservation benefits developers, Herwald argues. He points to Westminster, Colorado, where green space and trail systems have raised some residential land values by 10 to 15 percent.  (Story continues below.)

But creativity, innovation, and ingenuity benefit developers, too. Over his 25-year career, civil engineer and A Civil Group founder Jay Gebhardt says he has seen how too much regulation "took the creativity out of problem solving."

When Ron Westenhaver cut into bottomland forest -- "the kind you can walk through with little wildflowers everywhere" -- Gebhardt was working for the Columbia planning department.  Losing such a beautiful forest was tragic, Gebhardt says, but the city's rushed legislation proved a failed way to cope.

Hospital workers perched trees on "60-foot reinforced-concrete pyramids," recalls then-city arborist Eugene Basteed. "Of course, all the trees died because the water table was 20 to 50 feet below them. The construction drained all the water away from the root systems."

Faced with another public outcry over tree removal, well-meaning policymakers might again craft poor legislation, prompting history to repeat itself, Gebhardt worries. "It starts when something goes wrong," he says. "There's this knee-jerk reaction and everyone, including the media, says the sky is falling."