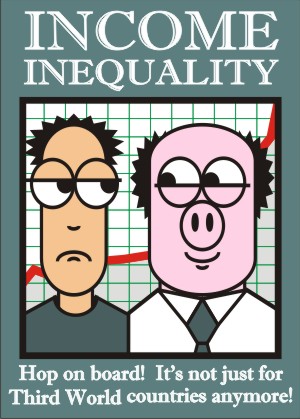 Topping the wrong list
COLUMBIA, Mo 5/4/14 (Beat Byte) -- In just six years, income distribution has grown more unequal in Columbia, Missouri than in any other U.S. city.
Columbia's Gini Coefficient -- a statistical measure of income inequality named for the Italian statistician who invented it -- has rocketed 14.26% since the 2008 recession, according to a list compiled by Bloomberg News.

The increase starkly contrasts with decreases in other college towns such as Boulder, Colorado, which saw a 6% decline in Gini Coefficient over the same period.  Other cities with decreases include Los Angeles, down 2.7%; and nearby Little Rock, Ark., with a 6.2% decrease.

The income inequality increase has landed Columbia in the 17th spot on a list of U.S. cities with the greatest income inequality.   Cities at the top of the list -- Atlanta, Miami, and New Orleans -- experienced a fraction of the inequality increase, with Atlanta at 4.29%; New Orleans at 5.39%; and Miami decreasing, with a 0.88% decline in its Gini Coefficient.
Between President Barack Obama's health care law campaigning and admonitions from Pope Francis that worldwide wealth has become mightily skewed, income inequality has topped headlines for months.
The concept is not new, however, and remains as controversial as it was when Corrado Gini -- a proponent of Fascism -- measured it in 1912.   But politicians, journalists, and media personalities have given the idea new impetus in the wake of skyhigh executive compensation and the rise of the so-called "One Percenters."
The latest discussion suggests college towns like Columbia are "pits of income inequality," either for the divide between wealthy students and working locals or just the reverse:  Census Bureau comparisons of low- or no-income students to locals with regular paychecks.

Columbia's chart-topping income inequality increase is probably attributable to several factors, including student population growth; lack of high-paying employment; an increase in local government transfers from lower and middle to high-income power players;  and slow (but growing) interest in entrepreneurial ventures that start small but have the potential for rapid growth, in both employment and prosperity.