THE HAZARDS OF CoMo BICYCLING: Reader urges more education for users of the road 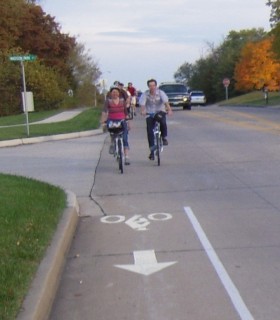 Drivers, pedestrians, and bicyclists must learn to get along

It is my opinion the project be abandoned completely.

The speaker representing PedNet said he is afraid to use the pedways painted on the streets.

Instead, I would like to see the GetAbout grant used for motorist, bicyclist, and pedestrian education, on the cooperation of each to share the roads.   Bicyclists and pedestrians get hit and killed by motorists; likewise, bicyclists do their share of motorist harassment.

I would also like to see education for city/county government officials, business and corporation employees, before the GetAbout funds are exhausted.

I met a young man who moved back to Columbia from Ft. Collins, Colorado -- a very bike friendly city -- to be with family.  He will not ride his bicycle here because motorists throw things at him.   It is too dangerous.

Family and friends, as motorists, talk about the bicyclists in and around the City of Columbia, the University and Boone County.

That conversation is never pleasant.

They tell me bicyclists don't obey traffic signals, causing cars to brake suddenly with children or pets, especially around the Mizzou campus, downtown, and parks.

Bicyclists slow down traffic in narrow driving lanes during peak travel times.  When passed, they sometimes yell and even hit the passing vehicles, scaring the drivers and creating unnecessary additional danger.

I have had my own confrontations with bicyclists, who carry sticks to ward off dog attacks, training on my rural, rough, gravel road.   Grant-funded education could better inform these cyclists of the following:

2)  The non-paved roads where my dogs and I live are not prepared or suitable for traffic from many types of bicycles.

3)  Some of the bicyclists we see out here are drivers with DUIs and lost licenses.   They bicycle when they can't get rides, and are often hazardous in their own right.   "Do you know what they call a bicyclist with a buck strapped over the handle bars?  A hunter with a DUI!"

If I have to pick a Rollins-Shepard Connector option, I would rather see the GetAbout grant funds improve the bridge over the Hinkson Creek to accommodate safe pedestrian and bicycle traffic, aka Option 4.
But more importantly, I would like to see the money spent on something that will benefit people in all parts of town:  motorist, pedestrian, and bicyclist education.

Ginger Owen is a Columbia resident