Think Picasso, in pen and ink

Every part of a star in a photograph from the Hubble Space Telescope, from its fiery solar flares all the way down, down, down to the individual atoms, molecules, even quarks and strings that make it burn so bright?

Every part of a human being, from a sad or smiling face through the twists and turns of the thoughts, emotions, plans, visions, past, present, and future that make the person?  The Whole Person, all in one image?

The German anatomist Gunther von Hagens has been doing this on a scientific level for almost three decades, showing the human body -- in his renowned Body Worlds exhibit -- in all its anatomical glory.

Closer to home, the artist Mike Sleadd -- our January Artist of the Month -- does it in a simpler yet just as profound medium, using pen and ink to lay bare the many layers of life.

You've heard the expression, "He's wearing his heart on his sleeve," or "You could see the pain on her face."   Sleadd's art is the pictorial translation of such figures of speech, reminding of another adage:  A picture is worth a thousand words.

"My drawings are intricate and simple at the same time," Sleadd explains.  "A tree is a simple thing -- bark, wood, leaves.  But -- the texture of the bark, the veins and colors of the leaves, the curves of the branches, the smell of the Earth, the strength of the roots, the science of it all, while stuck in the ground of a small planet hurtling around the sun...."

The "simple" part is evident at first sight, as Sleadd's whimsical self-portrait (below) suggests.  It's the intricate part that makes viewing his work not just seeing, but studying. 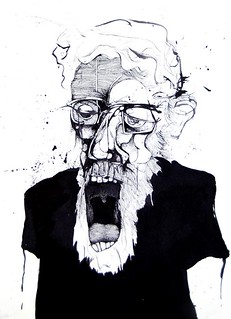 A Georgetown and Mizzou grad, Sleadd has created, taught, and exhibited in many states and countries, from Missouri and Kentucky, to Mexico and London.

"Shockingly detailed, amazingly shaded, and exquisitely rendered," Sleadd works mostly in black and white, explained Columbia Daily Tribune arts writer Jill Renae Hicks in a recent profile.    And though his preferred medium is ink, he uses more than just a pen to craft his pieces.

In the piece at this link, Black Sun, brush -- and feather -- joined pen to create what this writer sees as an almost Native American rendering of the Sun.  It's a Picasso-esque abstraction, light concentrated in lively, feather-like rays, while dark -- utter and total -- broods on the other side, in the orb -- that part of the Sun normally glowing hot and bright.

Could be the artist's way of illustrating another famous concept, that you can't see white unless you've also seen black; that it's hard to understand the power of light without the void of darkness.

It's also hard to understand the power of art without, well -- art, making observation and travel an essential component of the artist's life.  Sleadd illustrates with a story about a student who mostly learns art in books, and viewing "little bitty reproductions of works by famous artists on the Internet."

Once a year, the student treks to a big museum and "sees 'the real thing' and realizes ...there is more," Sleadd says.

"There are brush strokes, there are subtleties in the pallet."