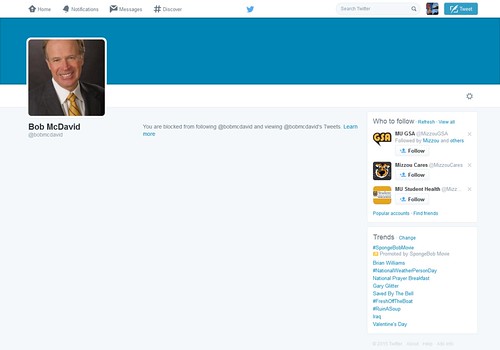 COLUMBIA, Mo 02/06/15 (Beat Byte) -- In a nearly two minute speech Monday night, Columbia Mayor Bob McDavid blasted the Columbia Heart Beat for "repetitively publishing inaccurate information about the state of city finances, making it very difficult for us to define the current state of the finances.  I think it's doing a disservice to the community at large."

He followed up by blocking the Heart Beat from reading or posting on his Twitter feed.

The Mayor's remarks -- which start at 51:40 in this video -- kicked off the first of "six points" about why he could not support a Downtown Columbia Leadership Council recommendation that City Hall create a so-called "Blue Ribbon Commission" to study infrastructure.

Ironically, most of McDavid's remarks were themselves inaccurate.  "The financials are in the 600-page Budget," he began.  But the financials reside in a document this publication frequently quotes called the Comprehensive Annual Financial Report (CAFR).

The Budget is a different document that represents how the city manager wants the City Council to spend public money during the upcoming year.

The Heart Beat inaccurately "stated that Water and Light has $75 million in cash, when they actually have about twenty [million]," McDavid continued.   Instead, we reported the publicly-owned city utility had roughly $74 million in its so-called "Unrestricted Fund Balance."   At the time of our report, the utility had roughly $131 million in cash and cash equivalents, nearly half that amount restricted for some reason (e.g. must be used to pay bond debt; bills;  pay back customer deposits; etc.).

"I don't know why he's confused about this," McDavid said, about Heart Beat publisher Mike Martin.  "I presume it's just because he doesn't know what the Certified Annual Financial Report means."

"He doesn't understand that cash allocated to Projects in Process count as unassigned finds," the Mayor explained. 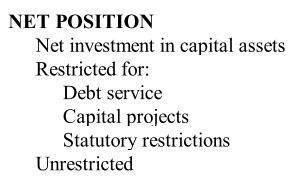 "The repetitive publication of the current city manager being the third city manager in a row hiding funds from the public I think has made it very difficult for us to define the the current state of the finances," the Mayor went on.

The city manager isn't hiding money from anyone.  It's all in plain sight, but in the CAFR, not the Budget.

Political conflicts of interest; petty corruption; and the long stranglehold Columbia's Town Bosses exert over the public's money are some reasons behind this publication's editorial position:  City Hall should get out of the business of trying to "define" the city's finances.

The numbers speak for themselves.