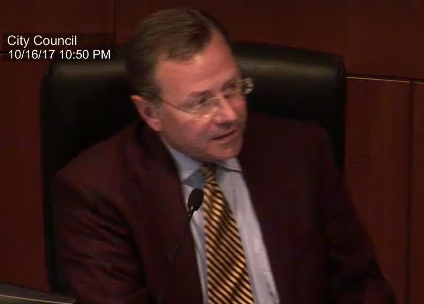 To expand the hotel, Parmley has applied for a $2.1 million TIF.  If approved, it would bring his total taxpayer subsidy to $5.4 million after a 2011 TIF.

Root represented plaintiffs in a lawsuit against the Opus Group, developers of a new student apartment that occupies an entire city block downtown.

"I'm going to speak very candidly," a clearly angry Treece announced. "It is one thing for [city] staff to advocate for this project.  It is another for them to try to stack the deck of the TIF Commission.

"I spoke to the applicants," he continued.  "One told me they were asked to apply for the TIF Commission by the staff person working on the project.   The person I appointed was actively opposed by the applicant [Parmley] lobbying this Council."

Parmley and St. Romaine also tried to lobby Treece. "I declined to meet with them until the TIF Commission could finish their process and make a recommendation," Treece said.  "That process doesn't work if it's not fair."

Jeremy Root (photo below) "is the best choice and the least tainted by what I can only describe as a bit of shenanigans," Skala said.

"I certainly don't believe any shenanigans have occurred," Matthes said, arguing that city policy requires the developer to reimburse the city for all TIF-related expenses.  "It's a decision not to subsidize" the TIF subsidy applicant, he explained.

The city manager also took issue with the idea that he, Parmley, and St. Romaine have been interfering with TIF Commission appointments.   "Reaching out to folks to try and find interest in commissions is routine," Matthes said.

"I don't need help recruiting applicants for the TIF Commission," Treece fired back.   "Staff should not be in a position of picking who serves, much less the applicant."

"I have full faith and confidence in Mr. Root and support the Mayor's decision," Skala said.

But other Council members disagreed.  "I'm satisfied with anybody else on the list," Second Ward Councilman Mike Trapp said.

"He is the only applicant who has been the face of a significant lawsuit against the city," Fifth Ward Councilman Matt Pitzer said.  "I don't think that makes him completely independent and impartial.  That, in my mind, is what tainted his application."
Root won the appointment with a 4-2 Council vote, with Trapp and Pitzer voting against and Treece, who made the nomination, abstaining as required by law.

The TIF Commission will hear more public testimony when it meets again October 30.

City public information officer Steve Sapp did not respond to a request for comment about St. Romaine
RELATED: