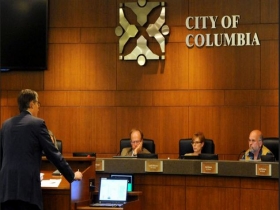 COLUMBIA, Mo 8/19/14 (Beat Byte) -- Life in Columbia for 99-percenters -- i.e. average wage earners and small business owners -- will get much more expensive if Columbia city manager Mike Matthes has his way with this year's city budget.

Despite City Hall holding over $85 million in so-called "unrestricted" free cash in its water, light, and sewer utility funds, Matthes is pushing one of the largest rounds of utility rate hikes ever.

City Council members last night heard from many residents who believe the rate and fee increases are perverse disincentives that punish conservation and low-to-middle income consumers.

The city manager wants Council members to approve a 73% increase in residential electric rates that will hike costs on conservation-minded, low-use consumers by 23% while higher-use consumers will see only a 0.7% to 1% increase.

Under Matthes' plan, the so-called "base customer charge" paid regardless of electric usage will rise from $8.45 to $14.60 per month, its largest increase in city history.   Customers who installed heat pumps to conserve energy will see higher usage rates as well.
"I'm very disappointed with the direction you seem to be going:  the less you use, the more you pay," Columbia resident Alyce Turner told the Council.   A "member of the city's Energy and Environment Commission for over a dozen years," Turner said "this does not encourage conservation.   Is this really what we want to be saying to the public?"

The Ridgeway Neighborhood Association passed a resolution opposing the base usage rate increase, president Pat Kelley told the Council.  "It's really unfair to struggling residents in our neighborhood who are elderly or low income," she explained.   "Charging for actual usage is much fairer because you have some kind of discretion to decide how much you're using."

Matthes also wants to eliminate city-provided trash bags, a move some have facetiously labeled "revenge" after residents defeated his roll cart rubbish collection proposal.   Speakers condemned bag elimination, which Matthes claims will save the city over $300,000.

"My family is very pleased with the current system of using city-provided trash bags," said former Columbia School Board member Chuck Headley.  "The bags are high quality and I suspect the city can buy them more cheaply than I can.  I'm concerned about the quality of bags if citizens are buying them while trying to keep their own budgets down."

The Ridgeway Neighborhood Association also passed a resolution opposing "discontinuance of black bags," Kelley told the Council.   "We did a survey in our neighborhood and the biggest issue was not crime or drugs, but trash.   If you take away these sturdy black bags, our neighborhood will be harder to keep clean.  Taking the bags away also functions as a rate increase."


"You have a net zero house.  Congratulations," McDavid told O'Connor, referring to a house that produces as much energy, usually via solar panels, as it uses.   "How should you compensate the city for the city having to buy capacity when you want to use electricity?"

"The base rate is properly low," O'Connor countered.  "We've made a conscious effort to encourage conservation and efficiency."

Neither the city's Water and Light Advisory Board nor the Energy and Environment Commission endorsed the rate increase, O'Connor added.

While charges for large utility consumers will rise only slightly, their so-called "summer and non-summer demand charges" will fall, decreasing 6-11%.