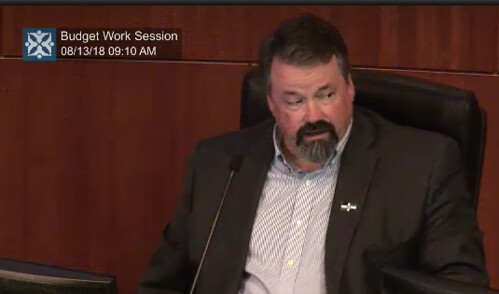 Matthes"Just kind of a random check"
COLUMBIA, Mo 9/14/18 (Beat Byte) -- The Missouri Department of Revenue (DOR) has declined to confirm an unusual -- if not bizarre -- explanation about why city of Columbia sales tax revenue increased one percent over June 30 of last year, despite city manager Mike Matthes' predictions to the contrary.

A one-time DOR check for nearly three million dollars to correct a software glitch was to blame for the increase, city finance director Michele Nix, who resigned Sept. 4, told the Columbia City Council at an August 13 budget work session.

"I'm looking into this now," DOR communications director Anne Marie Moy emailed the Columbia Heart Beat Aug. 22 on a request to verify or dispute Nix's explanation.  But Moy did not respond, even after another, more detailed follow-up email five days later.

City manager Mike Matthes has again based his annual budget on declining sales tax revenues, this year of at least two percent. Released in June, City Hall's 9-month Interim financial report instead showed an increase of $158,659 or one percent, compared to the same time last year.

"We have seen a continual drop in taxable sales in the community," Matthes told the Columbia City Council at the six-hour hearing. "As you can see in this chart (pictured), in the parentheses are negative numbers."
"But actual tax revenue is up through the first nine months of the year," Fifth Ward Councilman Matt Pitzer said.  "The sales tax revenue collected is up."

"We received a one-time check from the Department of Revenue. I think it was due to a computer change, a software change," Matthes replied, turning to Nix.

"Right. They changed their software at the end of the year and sent us a check," Nix said, in a hushed voice.

"We actually got an extra check from them, not based on taxable sales for this year, but they sent an extra check for prior years to true up something that..." Matthes added, opening his hands and shrugging.

"So you don't know what year it was from or what it was for?" Fourth Ward Councilman Ian Thomas asked.

"It's an unusual payment," Nix said, fidgeting with files, not looking at the Council.  "I wouldn't expect to get another one like that. It was just kind of a random check that they sent."
"That's just because they changed software?" Thomas asked.
"Yeah. They found some problems with the way their software was handling things and they computed it and sent everybody a check," Nix said. "The county got one, too."

Thomas then asked Nix for sales tax figures from 2017 and previous years. Matthes has based his budget on declining sales taxes almost since he took office in 2011. 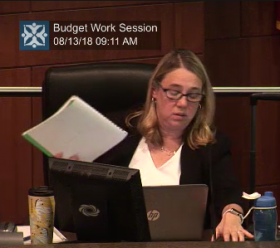 "So there was even a slight increase then without that check?"  Thomas asked.
"No, that includes that check," Nix said.

"So when did that check come in?" Thomas asked.

Regardless its origins, the big check could "diminish the argument sales taxes are way down," Third Ward Councilman Karl Skala said.

When Thomas worried the city's predictions could "be contaminated by this artifact of three million dollars," Matthes reassured him.