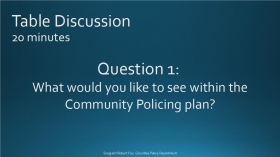 "Straight up bullshit"
COLUMBIA, Mo 5/27/18 (Beat Byte) -- A question city leaders often ask to boost support for tax increases -- "what do you, the public, want us to do?" -- is falling flat at forums about community policing and a new property tax to pay for it.

With presentations heavy on buzzwords but light on details, Columbia Police  Sgt. Robert Fox has led discussions about the new crime-fighting technique.
City manager Mike Matthes' selected Fox as his community policing point man in March.
What the public wants
Fox's first slide (above) asked "What would you like?" at a community policing forum last week.


"Them asking the community what we would like tells me they don’t really know how to move this from one place to the next," former Montgomery, Alabama police officer Bill Davis said at the forum.

Other slides suggested "the task force is struggling to come up with a vision statement," attendee Andrew Twaddle wrote in a meeting summary on Facebook.  "I am having some difficulty understanding why a broad philosophical statement seems to be so evasive."

Taking these concerns to heart, Columbia TIF Commission and Downtown Leadership Council member John Clark, an attorney, has repeatedly emailed city leaders materials he hopes will cement their plans.
"Here is contact information for four outside. independent, professional Community-Oriented Policing subject matter specialists with proven citizen participation expertise," Clark emailed Matthes.  To community development director Tim Teddy this week, Clark forwarded a handful of documents and a "suggested philosophy and guiding principles for community-oriented policing for the City of Columbia."
The Tax Increase That Will Not Die

Matthes and other city leaders want a second swing at a property tax increase for more cops.   A first attempt failed at the polls in 2014.

One way into the publics' heart, they believe, is through "community policing," a practice that promises to shift the police department's "warrior mentality" toward a kinder, gentler "guardian mindset."
"Not my job"
"Is the [police] department going to embrace a guardian mindset and how do they plan to do that?" RMF organizer Traci Wilson-Kleekamp asked Sgt. Fox when he requested public opinion at the April RMF forum.  "We've already got opinions from the public showing up at meetings," she said.  "That part is settled."

But Fox refused to discuss how his department would implement community policing.  "It's just not my job," he said. 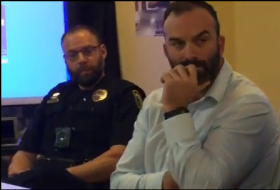 Sgt. Mike Hestir, Fox (r)
"It's not my police department. I'm not the chief of police," Fox continued.  "We can talk about the guardian mindset and the warrior mindset and the culture of the police department and the leadership and everything else, but that's not something I'm involved in.  My reason for being here is to get your opinions about community policing in Columbia."
The police sergeant's answer did not satisfy Wilson-Kleekamp and other audience members.  "I want you to tell Mike Matthes that he is straight up bullshit if this is his game plan," Wilson-Kleekamp told Fox.  "If you're not prepared to come here and talk philosophy, we have nothing to talk about."
"Chief Burton has been here for years," added forum participant Carol Brown. "He has all this information."

The various audience frustrations may reflect a common lament about City Hall's public outreach RMF members on Facebook connected to the community policing push:  that city leaders have a pre-determined outcome and couldn't care less what the public says.  All the hearings and meetings and forums then are little more than a ruse, often to sell a tax increase.

This frustrating practice has a name: "Kenney's Law of Columbia Community Relations," after former Columbia pastor Carl Kenney.
"We've been to meeting after meeting after meeting," Wilson-Kleekamp told Sgt. Fox at the April RMF forum, referencing the Mayor's Task Force on Community Violence and City Council hearings prior to their community policing Resolution.  "I don't know what other opinions you need.  It's kind of a waste of your time, honestly."
What the public wants to see in community policing, she added, "is settled business."