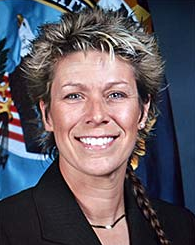 Just a month after she was named Missouri's top emergency management director, the Association of Public Safety Communications Officials (APCO) named Schwartze the International Director of the Year.

She has been the Springfield-Greene County 9-1-1 Emergency Communications Director since 2013.
“As a city, we are very fortunate to have Zim’s wealth of experience in law enforcement, emergency management and emergency communications in Springfield,” said City Manager Greg Burris.

Schwartze took the Springfield position after 20 years with the city of Columbia, as a police officer, police captain, and director of the Boone County Joint Communications 9-1-1 and Office of Emergency Management.

APCO, the National Emergency Number Association, and the Missouri 9-1-1 Directors Association last month named her Missouri 911 Director of the Year.


A Jefferson City native and Mizzou grad known for her personable style and infectious enthusiasm, Schwartze is a Law Enforcement Training Institute instructor; treasurer of the Missouri 9-1-1 Directors Association; and past president of the Kansas-Western Missouri Chapter of the FBI National Academy Associates.

A longtime volunteer with Special Olympics-Missouri, she chairs the State Summer Games held in Springfield each year.

Before her career in public safety, Schwartze was an early darling of the American Gladiators television show, taking down the fearsome character "Zap" in a televised tussle that earned her accolades as the competitor with the most heart.

In a highly-publicized move many believe was meant to embarass her,  Mr. Matthes escorted Schwartze off the premises at City Hall, ending her decades-long tenure with Columbia.

She had criticized police chief Ken Burton in a consultant-driven management survey she believed was confidential; and refused to back the Blight/EEZ plan Matthes and former Mayor Bob McDavid tried to sell as a "jobs-creation" tool.

City Council members passed, then repealed Blight/EEZ, widely criticized as a developer land grab scheme for the city-wide eminent domain powers it would have granted.

Schwartze filed suit against the City of Columbia, Matthes, and Burton in 2014, alleging Mr. Matthes breached a 2009 employment contract.


At her termination meeting, Matthes and then-city attorney Fred Boeckmann "treated Captain Schwartze as a criminal," her lawsuit alleges.  "They required she be  escorted off City property  by a police officer" and "refused to let her contact her husband."

Mr. Matthes has denied her claims, explaining that she was terminated for "budgetary reasons" and left on "good terms."   The case remains in litigation.
The world’s oldest and largest organization of public safety communications professionals, APCO will recognize Schwartze at its annual conference Aug. 14-17 in Orlando, Florida.

"Thank you to all of our award winners for your service above and beyond the call of duty,” said Brent Lee, president of APCO International.