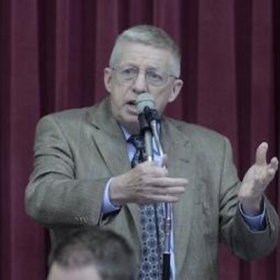 COLUMBIA, Mo 7/14/15 (Op Ed) -- As chair of a committee this year that advocated utility rate hikes and bond debt to replace aging Columbia infrastructure, former Missouri State Representative Chris Kelly blasted people who questioned the proposals; his position as a lobbyist for utility giant Ameren; and his wife's position as a Federal Judge overseeing the Opus student apartment lawsuit, which hinges on public infrastructure.

The veteran Boone County politician's unusual behavior -- a hallmark of his public service Kelly calls "my unedited self" -- and his conflicts of interest are raising questions about his latest high-profile public position, as chairman of Columbia Mayor Bob McDavid's "blue ribbon infrastructure task force."

The idea behind the "blue ribbon" group is to have non-partisan, unbiased task force members seek solutions to Columbia's long-standing infrastructure woes.

"I hope Chris Kelly's tirade was captured on film," Keep Columbia Free (KCF) director Mark Flakne said on Facebook, after Kelly blasted this writer's wife at a public forum about Propositions 1 and 2.    "Alison Tharp Martin pressed him on his possible conflict of interest -- Ameren lobbyist inserting himself in city utility rate increase ballot issues -- and he flipped shit."

Kelly opened the forum with a quip, calling it "a good thing my wife" -- Federal Judge Nanette Laughrey -- still works because "I'm retired."

Alison challenged him about his new job as an Ameren lobbyist, a move that generated controversy.   "What difference does that make?" he barked, becoming what Alison characterized as a "poster child for bullying".

"He sounded like he was used to people mentioning [the Ameren job] and was very sick and tired of hearing it," Stephanie Yoakum noted.  "But he shouldn't be.  He works for the city and Ameren less than sixty days after 'retiring' from being a state representative.  This leaves a bad taste in my mouth."

Then a Boone County Circuit Court Judge, Kelly publicly dressed this writer down a decade ago for questioning his advocacy of a tax hike to pay for a $20 million expansion of county and courthouse office space.

Should a sitting judge push for plush upgrades to his own offices on the public's dime?  I asked at a public forum.  Judges are supposed to be the epitome of non-bias.   In so many words, Kelly told me to shove it.

A few years later, State Representative Kelly suggested a campaign slogan for Kelly Schultz, a Democratic statehouse candidate.  "Vote for Kelly Schultz.  She has a nice butt,"  Kelly said at a fundraising event.

People familiar with his M.O. "knew the comment was inappropriate, but were not necessarily surprised," an attendee who heard the remark told the Columbia Daily Tribune.   "People who don’t know him...I think they were pretty shocked that a Representative would say that in public."

Kelly later apologized, but not after first denying the remark. "It’s sadly the kind of thing I say," he told the Tribune. "I know who I am.”

At a public town hall about Blight in 2012, then State Representative Kelly ignored speakers and played backgammon while attendees complained public officials "weren't listening" to concerns over the controversial proposal.   He didn't apologize that time.

"Yes, I played backgammon," he told the Columbia Heart Beat.  "I was my usual unedited self."