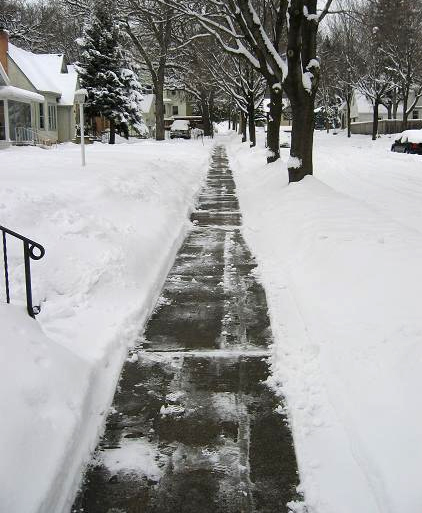 City won't plow streets, so why should we plow sidewalks? residents ask

On the snow removal, I'd say the City Planners who dreamed this one up must have balls the size of church bells, when you consider they no longer remove snow from the city streets.  So they are going to fine me, then shovel my walks while they leave the adjacent streets untouched?  Do as I say, not as I do?  -- Howard Audsley, Columbia
I'll clear my sidewalks when they get a plow down Richardson St.   Last time it snowed a bunch of us neighbors got together and cleared the street so us 'n' the buses from Benton could get through.   What a bunch of DREK -- command the residents to do something that they themselves won't do for the residents. -- Kay Allen, Columbia
On the new city sidewalk snow-plowing rules:   A few years ago, I lived on Donnelly Ave. (central Columbia) and they were talking about building sidewalks on both sides of the street.   I approve (mostly) of making the streets more walkable and bikeable.   But if this latest command had arisen at the time, I believe we would have seen a populace uprising!
"What? You're going to take MY land to build a #$%&&* sidewalk for the city, and then you tell me I have to snowplow YOUR sidewalk or you'll fine me?    How about if I take the sidewalk out instead?   Then there'll be nothing to plow!"    -- Paul Berg, Columbia
LOVE your letter/story about sidewalk snow removal!  Well written and with a bite to it.  I am proud of your voice!  Keep it up!
-- Nicole Fulcher, Columbia
Dear Members of City Council:   I write to urge you to reject the proposed snow removal policy and indeed to weaken the existing policy. The following focuses on requirements for residents.  The requirements for business owners may be different, and I do not address them.

First:   Requiring residents to remove snow is a very significant burden (physical or financial) when there is a heavy snow fall. It will surely lead to some health problems (e.g., heart attacks) for those unable to afford to pay for its removal (or purchase a snow blower).

Second:  In a town like Columbia, where the snow typically melts within a week or so, it is very probably inefficient to require snow removal. For most residential areas (e.g., where traffic is low), the costs do not justify the benefits. People can walk in the streets.

Finally, where it is worth removing the snow, it is far more efficient for the city to do it, even if this means slightly increasing taxes, or cutting back elsewhere.   I conjecture that the total financial cost of each resident paying someone to clear his/her section (or the imputed cost of doing it him/herself) would cost three times as much as if the city simply plowed the sidewalks. It therefore seems crazy to require residents to clear the snow.

I therefore urge you not to strengthen the requirements for residents to clear sidewalks, and indeed I urge that you weaken them. Either the city should clear them, or residents should be free not to clear them.