COLUMBIA, Mo 5/18/14 (Beat Byte) -- With one Columbia City Councilman out of town, and help from a newly-elected Councilwoman, student apartment developers Monday night are poised to knock the proverbial ball out of the park while kicking their opponents to the curb.

Opus Development 's six-story downtown student apartment will likely sail into home plate with four favorable Council votes.  And after publicly declaring it had put an even larger student apartment project on hold for a year, American Campus Communities (ACC) is seeking final approval in July, when school is out and many people are out of town.

After a public hearing tomorrow night, City Council members will vote on an "amended" agreement with Opus Development.

The Minneapolis-based developer spawned a nearly two-month citizen effort to repeal an original agreement allowing a 6-story student apartment building in the heart of downtown.   Conceived and championed by First Ward Councilwoman Ginny Chadwick, the amended version includes some minor changes:  a first floor retail and fitness area; purchase of 118 bus passes; and a $450,000 "contribution" for sewer work nearby.

The amendment also includes a so-called "poison pill" provision designed by city attorney Nancy Thompson to halt further repeal efforts.   "Council is essentially saying we will respect your wishes and repeal the prior ordinance as long as you abandon the referendum process," attorney Jeremy Root -- who co-organized the Repeal 6214 effort with over 60 signature gatherers -- told the Columbia Missourian.

Past history since the original agreement -- Bill 6214 -- passed after a week of hasty hearings in March suggests the amended agreement will also pass, with YES votes from Mayor Bob McDavid, and Councilmembers Laura Nauser, Michael Trapp, and Chadwick.

Third Ward Councilman Karl Skala -- who opposes both versions -- is traveling out of the country and will not be availalble to vote.

Ironically, if the amended Opus agreement passes tomorrow night, it will do so with one less public hearing than its predecessor.  Bill 6214 had two public hearings; the new bill, dubbed 130-14, will have only one.   It will also bypass the nearly 4,000 citizens who signed a petition to stop the project in light of what many have characterized as a Big Lie:  city manager Mike Matthes' contention that downtown development must stop for lack of infrastructure. 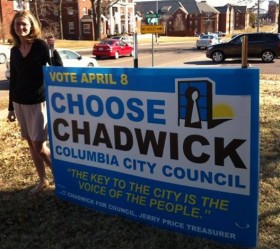 Meanwhile, American Campus Communities has re-appeared after declaring it would bow out for a year.

ACC wants Council members to take up both measures at its July 7, 2014 meeting, a move that seems counter to  the company's April 17 announcement.   Developer puts downtown housing project on hold for a year, headlined the Columbia Daily Tribune.

"American Campus Communities, an Austin, Texas-based developer with plans to build a 718-bed apartment complex on the edge of the University of Missouri campus, wants to push its project back a year to allow the city time to improve utility infrastructure downtown and for residents' passions about downtown residential development to cool," the article explained.   "Chuck Carroll, vice president of development for ACC, said the developer wants to begin construction on the project at the start of 2016 and have it ready to take tenants by late 2017."