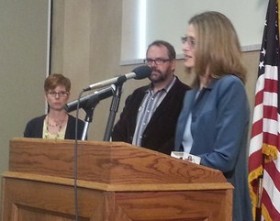 A wolf who wants voters to think he's just a cute pup
COLUMBIA, Mo 11/17/14 (Analysis) --  Though not surprising, the news Michael Trapp plans to seek re-election to the Columbia City Council should alarm area voters.

If ever a wolf in sheep's clothing took to the Council dais, it is the Second Ward Councilman, who masqueraded as a "man of the people" complete with cuddly doggie during his 2012 campaign, only to emerge one of City Hall's most ardent -- and arrogant -- Big Developer supporters.

In May, he stood with Councilwoman Ginny Chadwick at a press conference she called to chide the public about its "misguided" opposition to the Opus group's downtown student apartment (photo above).
Mr. Trapp later joined Ms. Chadwick, Mayor Bob McDavid, and Fifth Ward Councilwoman Laura Nauser to ignore not one -- but two petitions with thousands of voter signatures opposing City Hall's "development agreement" with the Minneapolis-based builder.
Under the tutelage of consultant Jeff Chinn, a master of political disguises, Trapp started his first campaign hitting all the right notes.

He would be a "bread and butter" Council member focused on infrastructure basics -- from pothole repair to road work, he said at a February 2012 Chamber of Commerce voter forum.   So committed was Mr. Trapp to restoring Columbia's failing infrastructure, he even gave specifics, arguing that City Hall's 57-year re-paving schedule doesn't work because "paved roads don't last for 57 years."

Just two years later, a transformed Trapp argued vehemently for Opus Group's "right to build" a downtown student apartment, despite the city's grossly inadequate infrastructure.  His 15-minute rant during a March 2014 meeting on the issue delivered one unforgettable gem of twisted logic after another.

"Our ongoing infrastructure problems would exist in the absence of all new development," Mr. Trapp told an anxious audience at that March meeting, vigorously shaking his hand.   "We would have a downtown sewer issue in the absence of all new development.   We've heard this over and over again."
Translation:  We already have bad infrastructure, so what will it matter if Opus -- or American Campus Communities or Collegiate Housing Partners -- adds to the problem?

"Saying no to downtown infrastructure just moves it.  It doesn't make it go away," he said.   "It's not a magic wand that eliminates demand for student housing."

As one of City Hall's Gang of Four, Mr. Trapp has thrown his political lot firmly in with Mayor McDavid, whose "fiscally conservative" administration has become one of the most expensive in Columbia history.

Hopefully Mr. Trapp will draw a solid, well-funded opponent to restore Second Ward governance to Second Ward residents and voters, who in the end do know best.

If not, the many constituents who have fought Mr. Trapp since he took office two years ago -- most notably opponents of Blight and Opus -- can look forward to more battles, which are always harder to fight after the fact than before the election.