"TAKE A TWO-BY-FOUR TO IT": City Council candidate suggests way to deal with city management 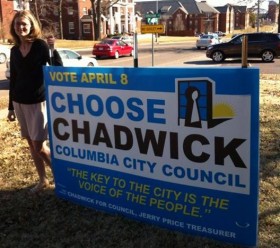 The forum was light on substance but loaded with personality.

Easley at first repeated a theme he emphasized throughout the forum:  "The Council, the city manager, and the Mayor all need to sit down together and talk and work things out."

But as though realizing his "can't we all just get along" argument was hopeless, he off-handedly suggested the two-by four, bringing down the house.   "You don't need to quote, to print that," he joked, passing the microphone to fellow candidate Ginny Chadwick, who agreed that "something needed to be done."

"I've heard from people very concerned about the lack of transparency," she said, telling Rogers she understood and "had received" his concerns about the trouble between Staff and Council.

The Muleskinners event was another forum featuring only Easley and Chadwick, with third candidate Tyree Byndom noticeably absent.   Byndom -- one of few black candidates in any local race over the years -- has declined to campaign for religious reasons.   It's a decision the other two candidates said they respect that nonetheless leaves a hole in the proceedings.

Seeking to patch the hole, audience member Sue Tillema asked Easley and Chadwick how they would represent the First Ward's considerable minority population.   "We both represent minorities," Chadwick explained.  "I'm a low-income, single mother and a woman.  And Bill represents the elderly population, though I don't want to speak for him."

The contrast between Easley's gruff, unfiltered responses and Chadwick's sweet, cautious demeanor was unexpectedly charming.   Easley briefly wrapped the microphone cord around his foot, while Chadwick almost playfully tugged at it to answer a question.    She sat to answer questions, more casual; he stood, more formal.   She laughed at his jokes; he was a perfect gentleman.

The impression I left with was also unexpected.

Through the rough demeanor that prompted Mayor Bob McDavid to demand he take his seat during a Feb. 17 public hearing, Easley emerged as the kind of pure idealist politics rarely sees.  He suggested, for instance, that landlords lower their rents rather than "tear down their empty homes";  that City Hall spend "most of its money on people who really need it,"; and that city government take the plight of low-income families and the homeless seriously, making sure no one is ever evicted from a home because they can't afford the mortgage or the rent.

The much younger Chadwick -- whose resume and yard signs almost scream "I'm an idealist" -- instead came across as the pragmatist, repeatedly acknowledging the complexity of each issue and the thoughtful, planned approach she would take if elected.

The candidates debated infrastructure, student apartments, zoning reform, homelessness, community health, affordable housing, and city finances, not blazing new policy paths, but engaging the audience nonetheless -- even when the discussion turned wooden.   How should the city prioritize budgeting?  someone asked.  What kind of things should City Hall buy?

"Two by fours," Skala quipped from the audience, getting laughs around the room once again.