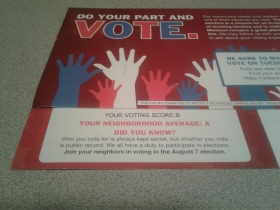 The mailer -- paid for by anti-Prop A PAC the Committee to Protect Mo Families -- "grades" recipients on how many times they voted in even- year primaries since 2012.

"Who you vote for is always kept secret, but whether you vote is public record," the flyer says. "We all have a duty to participate in elections."

Dozens of comments across several Facebook and Twitter feeds condemned the flyer as unwarranted "vote shaming."
"This is a common trick by special interest groups to get people to vote," Boone County Clerk Taylor Burks wrote on one Facebook discussion.  "There is usually backlash when political campaigns do it, so they set up PACs or dark money groups to send out these 'voter report cards.' They get an 'A' for creepiness."

People wanted to know if the publicly announced report card broke the law. "They're using public voter records for these mailers, so they're legal," Burks explained. 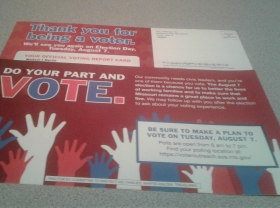 "Offensive," "inaccurate," "worthless," and "threatening" were among dozens of condemnations on the Facebook group CoMo for Progress.

Others complained the flyer missed absentee voting, and wondered how everyone in an A-grade neighborhood reported getting a B, C, or D.

Mailed from 227 Jefferson Street in Jefferson City, the voter report card lists Martin Walter as the Treasurer of the Political Action Committee (PAC) behind it.

The Committee to Protect Mo Families "is a broad-based coalition of organizations and individuals who have come together to support middle class families and oppose anti-worker policies such as so-called 'Right to Work,'" the PAC's website explains.

The PAC opposes Proposition A, which if passed August 7 would "prohibit as a condition of employment the forced membership in a labor union or forced payment of union dues," according to ballot language.