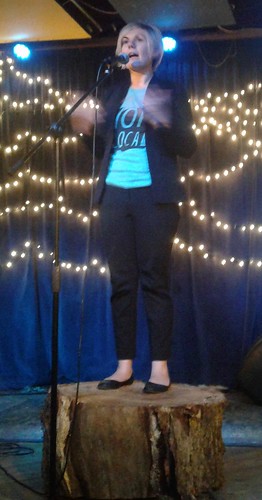 Given on a tree stump that raises the speaker enough to be heard over an outdoor crowd, stump speaking is an old-timey American political tradition.  Abe Lincoln is famously depicted in statues and drawings giving stump speeches.
No awards were presented that this writer saw, so we're presenting our own.

"Power," of one sort or another, was a common theme.

Boone County Clerk candidate Brianna Lennon (top left) spoke about the power of the vote and the importance of elections.

Perhaps partly for her prior Boone County Commission candidacy, Lennon was the most poised and polished speaker, and wins the Heart Beat's First Place award for her speech.

Referencing her professional experience with the elections process, Lennon emphasized the importance of going to the polls with clarity and passion. She'll be a worthy and formidable opponent for Republican incumbent Clerk Taylor Burks.

In second place was Boone County Presiding Commission candidate David Seamon (center, right) a U.S. Marine born in Columbia, SC who returned to the place he feels "truly at home," Columbia, Mo. A father at age 17, shortly before his own father died, Seamon spoke about the power of overcoming, from big adversities to daily headaches. 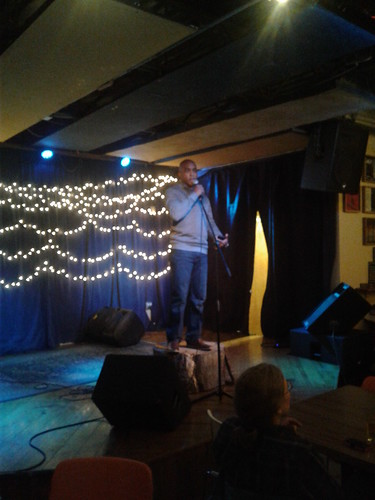 He cast himself as a keen problem solver ready to tackle County government's biggest problems, from lack of workplace diversity to the well-known tax-increase addiction.

"We need other ways to raise revenue," he said, a point he reiterates in the Columbia Missourian.

In third place, Stephanie Morrell is an assistant prosecuting attorney seeking election as the District 11 Circuit Court Judge.  She emphasized the power of criminal justice alternatives, like addiction treatment rather than incarceration.

Of all the candidates, Morrell projected the most charisma, with great eye contact, crowd comfort, and a boisterous sense of humor, traits that have likely served her well in front of the Bench.

"She has too much personality to be a judge," I quipped to my wife.

Fiftieth State House District candidate Michaela Skelton spoke about the power of education, and why politicians who continually short change it in favor of other priorities short change everyone.

Though her platform was populist traditional -- help working people, the disabled, the generally forgotten -- she delivered it with no-bullshit sincerity.  She stumbled here and there, and seemed nervous at points, but all the better, as her positions didn't come across as sIick and canned.

If Skelton's stump speech is any indication, voters who agree with her positions can count on her to deliver on her promises.
For some time during her turn at t 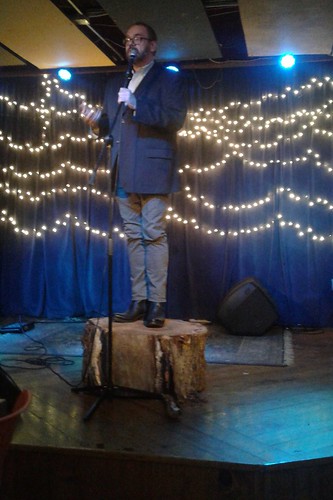 he stump, I was unsure what office Renee Hoagenson seeks (4th District Congressional seat currently held by Vicky Hartzler).
She got to that point toward the end of a talk that went way long, wandering through her life experiences rather than explaining what she intended to do for voters.  When a microphone sonic boomlet made everyone jump, "That may be my cue" to step down, she said, nonetheless forging ahead.

Hoagenson has an impressive resume as a self-made businessperson I had hoped she would pivot from more clearly toward her political goals.  Entrepreneurs are rare in the halls of power, to the detriment of voters who need their energy, drive, problem-solving skills, and ambition.

Reducing the power of money in politics hit home for Hoagenson, who said she's approached 5th District Congressman Emmanuel Cleaver about meaningful campaign finance reform.
A populist "common man" whose platform was refreshingly about the power of good old hard work, 47th District State House candidate Adrian Plank also spoke about overcoming adversity, including the toll of the 2008 housing bust on his family and business.
He came across as sincere and dedicated, but fell back too often on old ideas -- e.g. "tax the rich to feed the poor" -- that either need new approaches, which he did not offer, or the scrapyard.  Plank also spent too much time fumbling with notes, which pushed his presentation beyond the time limit.
Incumbent Second Ward Columbia City Councilman Michael Trapp (center, left) was the only non-partisan candidate -- which includes School Board and City Council -- to speak.  Kudos to him for making the effort, and giving a speech that clearly stated his goals and approaches.

Observing him these past six years, I've come to think of Mr. Trapp as stuck between populist everyman and political sellout.  It's a common dilemma politicians face, when making good on their ideals requires selling them out, to the power brokers who control the pursestrings and the spin cycle.

Mr. Trapp spoke of "being attacked" more than once, a deflection tactic politicians torn between these extremes often employ, as they grow frustrated with the political situation they create.
Mr. Trapp's idealistic speech was grounded in real-world solutions, and delivered with a rambling but firm sincerity. It illustrated my lament:  that he would be a marvel if he were free to be the leader I think he wants to be. 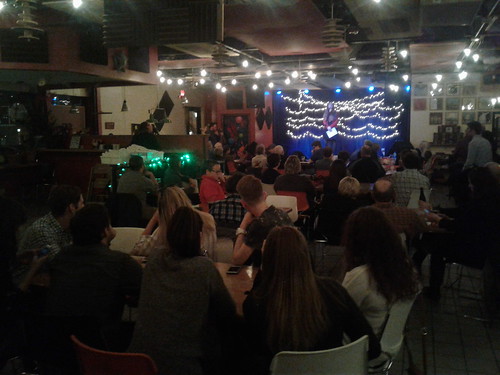 Special thanks go to Stump Speech organizers Emily Gustafson (who should run for office herself; she was great on the stump) and Bob Nolte.  It was a fun, retro evening with many young, new faces in a standing room only crowd (bottom).
Hail to the Stump for raising us up, over the crowd, to better see the road ahead.