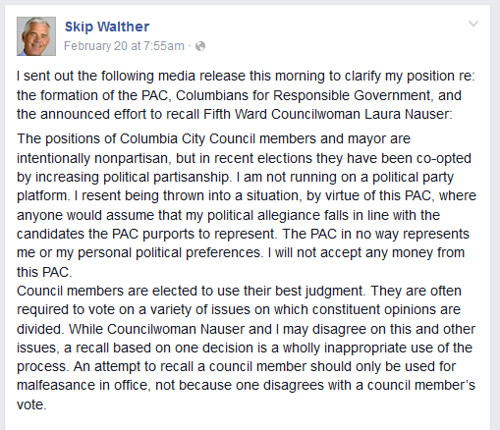 "I am not running on a political party platform."

Are Democrats behind a move to oust Fifth Ward City Councilwoman Laura Nauser?

Candidate for Mayor Skip Walther seems to think so.

With accusations of party politics run amuck, Walther -- a local attorney -- is blasting Columbians for Responsible Government which, oddly enough, endorsed him, promising to campaign against Brian Treece, whom this writer openly supports, in the April election.

On hearing of the endorsement, "The positions of Columbia City Council and Mayor are intentionally nonpartisan, but in recent elections they have been co-opted by increasing political partisanship," Walther wrote in a "media release" on his Facebook campaign page.   "I am not running on a political party platform."

Walther reiterated his concerns beneath a Trib story about the Nauser recall.    "I was not consulted by anyone about this PAC, and it does not represent me or my personal political preferences," he explained, calling the party politics it represents "damaging to our city".

Walther isn't clear which party (GOP, Democratic, Libertarian, etc.) is behind Columbians for Responsible Government, or why he considers it a partisan tool.    The PAC was formed to recall Nauser over her handling of a controversial power transmission line.

Regardless the PAC's purpose -- or which party is secretly behind it -- Walther says he wants no part of it -- or Dudley.

"I resent being thrown into a situation, by virtue of this PAC, where anyone would assume that my political allegiance falls in line with the candidates the PAC purports to represent," he explained.   "The PAC in no way represents me or my personal political preferences.  I will not accept any money from this PAC."

Curious about his strongly-worded accusations, this writer wanted to know how power transmission lines are partisan?

How had Walther ascertained Columbians for Responsible Government was related to a political party, and which party -- Republican, Democrat, Libertarian, Green?

Nauser ran against State Representative Chris Kelly on the Republican ticket.   So is this a Democratic PAC, given its opposition to her?

I posted two polite questions Feb. 20 on Walther's Facebook campaign page.   The questions were up for about a day.   Then they were removed and I was also blocked from posting anything else.

It was another surprise from the Walther campaign.

Critical of city communications and City Hall attempts to block information, Walther is running on a platform of "restored trust" and "providing information completely and freely."   He's even advocated dispensing with the Sunshine Law when citizens need information from city government.

“People ought to be able to get information from City Hall without needing to file Sunshine Requests,” Walther told the Trib, adding that if the city responds slowly to requests or refuses to give information, it contributes to a culture of mistrust.

Amidst recall petitions from across her ward, First Ward City Councilwoman Ginny Chadwick blocked contrary constituents from her Council Facebook page.   The moves set off another firestorm, during which Chadwick was blasted for non-transparency.

Columbians for Responsible Government has not yet responded to a request for comment.