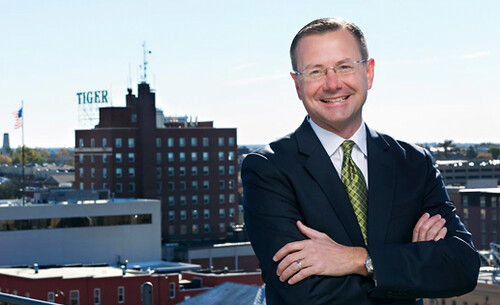 COLUMBIA, Mo 12/3/15 (Beat Byte) --  Brian Treece, whose canny ability to reach across the aisle has earned his reputation as one of Missouri's most well-respected political consultants, has announced his candidacy for Mayor of Columbia.

"I’ve spent my entire adult life working to create solutions to tough problems through people working together," Treece explained.   "Energized by the progress we have made on critical issues facing the City of Columbia, and encouraged by civic leaders of both parties, I’ve decided to run for Mayor."

Treece is campaigning on a back-to-basics platform that emphasizes public safety; infrastructure improvement; transparency; and "responsible use of our precious tax dollars."   His no-nonsense approach to public stewardship has included a highly-publicized request that city manager Mike Matthes apologize for lying to the public about infrastructure.

Known for his tact, patience, and organizational skills during highly-charged community and policy-making meetings, Treece is well acquainted with all sides of state and local governance.

Close to home, he represented privately-held Columbia Sports Ventures in their quest to build an ice/hockey arena before the Boone County Commission and Columbia City Council.

Chairperson of the Historic Preservation Commission, Treece worked with fellow Commissioners, city staff, and Council members on policies to preserve one of Columbia's cherished resources:  her history.

With the development community, building owners, and preservationists, Treece worked for over a year to pass a 10-day waiting period before historic buildings could be demolished.   For the time it allowed a compromise plan to develop, the waiting period is partly credited for saving Columbia's oldest building, the Niedermeyer, which once hosted Mark Twain.

As chairperson of the Downtown Columbia Leadership Council (DLC), Treece has led a team of Mayoral appointees to tackle the city's most pressing issue -- infrastructure.

The DLC has produced several recommendations Council members have started enacting, such as a Blue Ribbon Infrastructure task force, and one that has yet to happen.

"The city manager should clarify, retract and apologize for statements made in December," Treece said at a May 2014 meeting of the Downtown Leadership Council's Infrastructure Subcommittee.

Partnered with wife Mary Phillips in the consulting firm that bears their names, Treece has advised more than 60 clients on how to work with Governors, Congress members, senior administration officials, legislators, Mayors, Council members, and Aldermen across Missouri.    Supporters say he will bring a much-needed improvement in City Hall's relationship with state legislators.

Treece also seems to have passed his first campaign test:  the Trib's gloves-off, no-holds-barred, comments under a story about his candidacy.

"This is very good news for CoMo.   Brian will be a great Mayor!" -- agita

"Treece has a lot of street cred." -- Obiter

"Articulate and dedicated, with the 'been there, done that' to back it up."  -- Superaude

"I am delighted that Brian Treece is in the race.  Having served with him on city commissions, I watch him carefully at meetings because he handles difficult conversations well, not by avoiding the issue, but by getting to the heart of the matter quickly and focusing on solutions." -- LWV Citizen of the Year Pat Fowler

"Brian Treece is a smart, forward-thinking person who knows how to get groups to work together.  He knows more about City government and our infrastructure than most, and would work hard to balance development with smart growth. -- ColumbiaMO

And finally, this note from "hairball":   "Good for Columbia if this guy gets a spot at the table.  Good luck, Brian!"