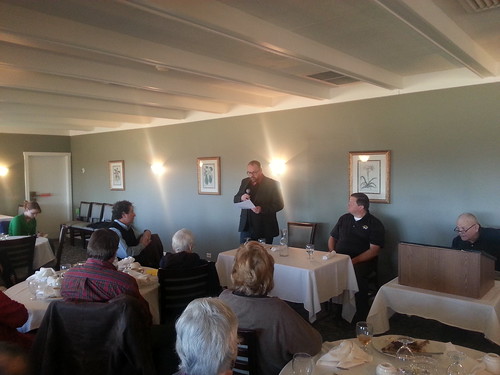 How many times, he asked the crowd, have you seen 20 to 30 people testify at a Council meeting, only to have Council members recite "prepared statements" that show "their opinions were made up before the meeting"?

"You have my word that if elected, I will never have a prepared statement during a Council vote," Love said.  Though Councilman Trapp was calm, measured, and intellectual, Love took the lead, starting with his opening remarks.

Ironically, Trapp read from a prepared statement while Love spoke without notes.

"I didn't want to run for City Council," he explained.  "But Mike Trapp was in favor of Blight/EEZ and I wasn't and 200-300 people in my neighborhood didn't like it either.  It was the same thing for the way Mike handled the 911 Center, which is very expensive for taxpayers.  I decided it was time to put up or shut up."

Trapp decided to run for re-election because "I believe I've done the right thing by voters," he said.  He gave plenty of specifics, including his support for Blight/EEZ despite widespread public opposition.

"I thought the business incentives were worth it," he said, citing Beyond Meat's decision to open a Columbia office.   Though Blight/EEZ failed to become city law, "Had I taken a strong ideological position against it, we wouldn't have had those jobs," Trapp explained. 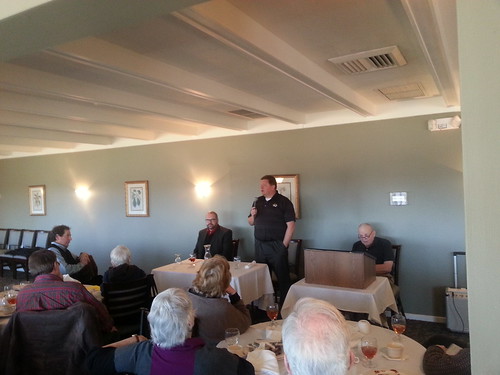 On crime, "I would rather my police officers deal with the shootings up the street from my house than run sting operations on Uber drivers," Love said.  "They need to get their priorities straight."

"I do wish the hours we spent on getting Uber to comply with city law were spent on other enforcement," Trapp agreed.  He cited his own crime-fighting record with "Ban the Box," a proposal he shepherded as leader of the Mayor's Community Violence Task Force.

On repairing and replacing Columbia's notoriously-poor infrastructure, "A good first start is to pass the stormwater fee increase," Trapp said.

But Love thought the time for "first starts" was long over.  "If a Council person is going to let crap back up onto their constituents, what good are they?" Love asked, referring to basement sewer backups, which he said "never seem to get any better".

He proposed spending more money on infrastructure and less money on parks and other amenities, before asking voters for any rate or tax hikes.  "What good are all our wonderful parks if the roads to get to them are crumbling on top of crumbling sewers?" Love asked.

On developers paying their fair share of infrastructure costs, Trapp said he supported raising development fees, but more modestly than a recently-defeated ballot proposition would have required.

Developers in existing parts of the city should not pay higher fees than anyone else, Love explained.   But developers who use the political process to get boondocks land annexed to qualify for city services should pay higher fees.

"I want to hold our developers accountable for providing exceptional infrastructure if they want to attach their communities to our city," Love said. 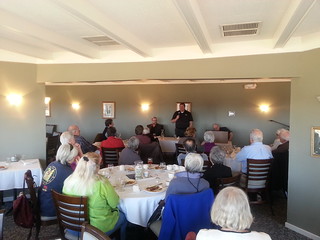 Driven by the St. Charles Road Development Gang's Somerset Village subdivision, the Battle High annexation "was a real surprise to the city," Love explained.  "We don't have money for the infrastructure out there."

On business tax breaks and other incentives, "I think inviting businesses into town is a good idea," Love said.  But businesses accepting the invitation must also accept free market capitalism, he added.

"The city has no place providing 'shovel-ready' land" or other taxpayer handouts to blunt free market forces, he said.  "We don't get anything from that."

Basics like good infrastructure are the best incentives of all.  "If we have poor roads and failing sewers, no businesses will want to come here," Love explained.

The candidates concluded much as they began, Trapp reading an eloquent prepared statement; Love speaking his mind.

"I know I've been caught in a twelve-and-half-minute rambling monologue," Trapp said to chuckles.  "But I've maintained my sensitivity to the struggles of working people to engage in the public process."

"If you like your current Councilman, you can keep him," Love quipped.  "But you have a clear choice.  I want to leave behind a city that is better for the people who come after me, and I'd like to ask for your vote."

"I agreed with Paul a lot more than I thought I would," Trapp said.