A wartime psychiatrist  and longtime CoMo resident remembers the enemy from within.   Continued from Part 2.
[Ed. Note:  After a guilty plea last month, a sentencing trial for John Russell is currently underway.]

With so little to go on, Jones says he has questioned himself repeatedly during the last three years.  “What   What did we miss?  Five people are dead.  Why didn’t I prevent it?” 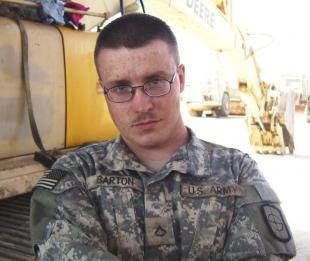 What did I miss?

And yet, when he returns to John Russell the soldier-client, Jones—a psychiatrist with 30 years experience including five tours of duty, four in Iraq and one in Bosnia—sees nothing more than “job dissatisfaction, boredom, and anger over repeated deployments.”

No wife or girlfriend back home who announced she’s pregnant with another man’s child in a Dear John letter; no business going bankrupt in the absence of its owner; no humanitarian leave issues like the sudden death of a beloved parent or sibling.

“When those things hit a soldier in the field, they’re left reeling.  They feel like they’ve lost all control of their lives,” Dr. Jones explains.   Sergeant Russell, on the other hand, “sat upright, didn’t raise his voice, and spoke deliberately, logically.  He was organized and self-possessed.  He seemed like a mature soldier with no evidence of any thought disorders.”

In other words, a soldier in need of return to his unit equipped with sound ways to cope with stress.  “He had just a few months left,” Jones says.  “He didn’t want another unit.  He didn’t want a transfer.”

But Russell didn’t want to return to Camp Stryker, either.  “I want out of the Army,” he told Jones.  “I want to get out.”

Russell’s unit at nearby Camp Stryker had a comparatively miniscule clinic, where he presented Dr. Fernbach—a board certified forensic and clinical psychologist who consulted to family and criminal courts and directed a prison psychology unit in New Jersey—with a mostly neutral demeanor.

His unit leaders weren’t treating him well, he told Fernbach.  They had reprimanded him after he had dressed down a female subordinate over a 13-minute tardiness.

But a reprimand shouldn’t cause depression or post-traumatic stress, and a tardy subordinate would hardly wound a person’s psyche.  Reports say Russell himself was late after “oversleeping” for his Sunday appointment with Lt. Col. Jones.  Relatives of Russell's victims aren't buying his claims either.  “PTSD and premeditated murder of five people are completely different,” Jacob Barton's sister Hannah writes in an online petition urging Russell's prosecution.

Absent a definitive diagnosis, Fernbach was instead asked to consider hypotheticals.    What if Sgt. Russell was chronically depressed or post-traumatically stressed?  lawyers wondered at a 2011 pre-trial hearing in Ft. Leavenworth, Kansas—home of the infamous military prison.  Could an angry comment from a superior set him off?

But 22 months in theaters of war taught Jones that Fernbach was right not to have guessed at Camp Stryker.  Guessing about wartime psychological issues can get people killed.   His voice cracks with restrained emotion as he describes soldiers who were talked down in the field, soldiers forcing rifles up their mouths, soaked in perspiration.

There was that soldier everyone thought was firing into a crowd, Jones recalls.   After he was subdued, the psychiatric team triaged him.   He wasn’t aiming at people, they learned.  He was firing into the sand.

Jones examined him, listened to his story, watched the soldier cross himself, with no eye contact, as he talked about speaking with his dead grandmother.

Jones asked the soldier’s fellow troops to find out what was going on.  He had been upset on the phone with his mother, they reported back.  His mother told the soldier his wife was leaving him for her ex-convict ex-husband back home.

The psychiatric team evacuated the soldier to a combat support hospital.  Jones watched as two Blackhawk helicopters that had braved the possibility of rocket launchers and rifle fire descended from the sky—one to transport the soldier on a secure litter, the other to fly escort.  “He smiled at me on the way out,” Jones recalls, later learning the man was treated, returned to duty, and one of the last troops to leave theater with his unit.

Next:  "He was almost casual."