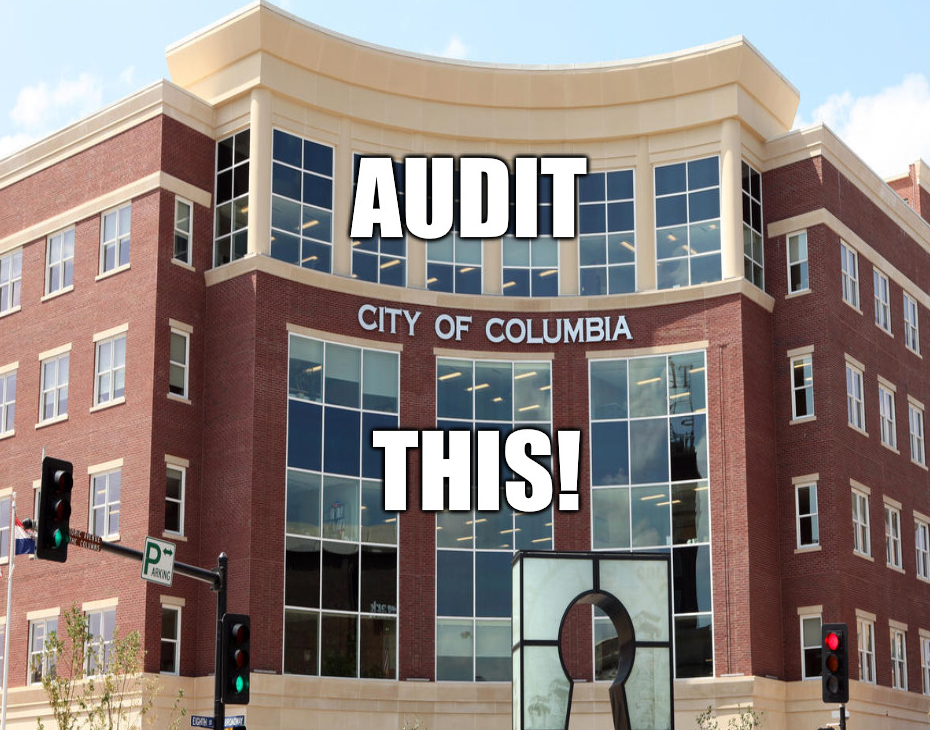 COLUMBIA, Mo 12/13/18 (Beat Byte) -- Despite steadfast resistance from every Columbia City Council member except Mayor Brian Treece, a citizens' group has launched a petition for a state audit of city government.

The group is seeking volunteers to collect signatures.

"The State Auditor's Office has given us the green light to request a performance audit," group administrators explain on the Performance Audit Support Facebook page. "We will begin collecting 5,000 verifiable signatures that need to be submitted to them by November 1, 2019."

Persons signing the petition -- which asks Missouri State Auditor Nicole Galloway for a complete examination of city departments, finances, efficiencies, and failures -- must be registered voters residing in Columbia.

Support for a state audit of Columbia city government has been building for over a year, largely driven by the unpopular policies of city manager Mike Matthes.  Matthes, who resigned in November, had been under fire for lying to the public about downtown infrastructure; holding illegal hearings to approve a trio of student apartments; trying to pass a property tax increase without voter approval; and using police department staffing turmoil to push a new property tax.

Matthes also fired popular Columbia public safety official Zim Schwartze, who successfully sued the city for wrongful discharge; and unwaveringly supported police chief Ken Burton, the only other city official who rivals Matthes for unpopularity.  He had become, in the words of retired utility director Jim Windsor, a patron of "mediocrity."

City finances have shared the chaos, with the resignations of Matthes' finance director, treasurer, and comptroller; and the revelation city officials have siphoned nearly $330 million from department budgets over the past thirty years to build a "pooled cash account" at the Union Bank of Switzerland.

Known as a "performance audit," the State Auditor's work differs from the "internal audit" contract accountants use to prepare the city's Comprehensive Annual Financial Report each year.

The internal audit is "not extensive and I wouldn't put much weight behind it," city Finance and Audit Committee chair Maria Oropallo told the City Council in July. "A performance audit looks at things a lot differently, in much more detail."
The State Auditor would examine "the economy, efficiency, and effectiveness" with which the city carries out its responsibilities,  with the "aim of making improvements," explained Oropallo,

who supports the state audit drive.

A state performance audit would ask how much value taxpayers and ratepayers get for their money, she added. Are Columbia residents getting the "right quality and quantity at the right time and place for the lowest possible cost?"

Is city government achieving "optimal output of services with available resources?"
The city's internal audit, on the other hand, "does not express any opinion about the effectiveness of the city's internal controls," Oropallo said.

Past citizen petitions have successfully recalled Council members and challenged the use of tax-and-ratepayer-funded infrastructure for student apartment construction.

The Performance Audit Support group is on Facebook here.