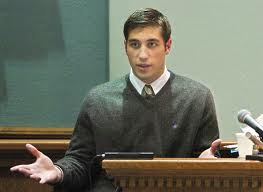 Civil rights violations, defamation among charges against 11 defendants
COLUMBIA, Mo 3/10/14 (Beat Byte) --  On Ryan Ferguson's birthday in October 1984, his parents never could have imagined "the Kafkaesque nightmare, turned into a reality, that laid ahead for their only son."

So begins a 50 page, nine-count, $100 million lawsuit filed today on Ferguson's behalf by a three-lawyer team.  The suit names the Boone County prosecution and City of Columbia police teams that sent Ferguson to prison for 10 years over a murder charge a Missouri appellate court overturned last year.

It also names the City of Columbia and County of Boone.

Both men insisted in public statements that Ferguson was guilty of the murder of Columbia Daily Tribune sportswriter Kent Heitholt in November 2013, shortly after the appellate court released him.   The defamation charge may avoid the usual immunity that accompanies criminal investigations and prosecutions because it did not involve those official acts.

The suit reserves the most serious charges for seven current and former Columbia police officers and two investigators with the Boone County prosecutors office.

Against William Haws and Ben White, investigators for then Boone County prosecutor Crane, the suit alleges destruction or suppression of evidence that could have exonerated Ferguson; reckless or intentional failure to investigate; malicious prosecution; conspiracy to deprive Ferguson of his Constitutional rights; and failure to intervene to prevent such conduct.

The suit also names the City of Columbia and Boone County, as "liable for the acts and omissions of their employees pursuant to their statutory duty to indemnify them."   To "indemnify" essentially means to take on the liability for the acts of others, in this case officials engaged in city or county duties.

The suit seeks $75 million in actual and compensatory damages, and $25 million in punitive damages, an amount that would be awarded to punish the defendants and dissuade from further alleged abuses in the future, should Ferguson be successful.

Ferguson is represented by the defense attorney whose work freed him, Kathleen Zellner; Douglas Johnson; and Samuel Henderson.