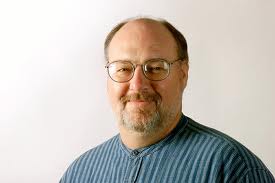 Despite already having an alibi -- two Tribune employees told investigators Boyd had left the building nearly 90 minutes before Heitholt was killed -- Boyd's five different stories placed him all around the crime scene at the time it was occurring.

"Boyd was the last person with Heitholt before he was beaten and strangled," wrote Kathleen Zellner, attorney for Ryan Ferguson, in an appellate brief that last month secured his release from prison for the murder.   "Boyd, in his first interview, described standing and talking with Heitholt in the exact location where the attack occurred."

Boyd, meanwhile, has steadfastly denied he had any role.  "I am not a killer," Boyd said in a 2011 interview.  He said he understood Zellner needed to clear her client, but that "I don’t understand this.  I know a part of me is nervous.”
Mike Boyd told his first two stories the morning of Heitholt's murder, a beating investigators say took several minutes between 2:15 am and 2:22 am.

"Boyd stated that he saw Heitholt go to his car," Columbia police officer John Short wrote about the first interview, conducted at 3:30 am.  "He stated while standing there talking with Heitholt, they began to talk about a stray cat that was there that was clawing at Heitholt's car tire."

Heitholt fed the cat that night as he often did, taking a bag of food from the front seat of his car and placing it near dumpsters along an alley that led away from the premises.   Boyd told Short he went to his car and on his way out, saw Heitholt "going into his vehicle head first.  He did not know if [Heitholt] was getting into his vehicle to leave, or getting his  bag."

The time was roughly 2:20 am, precisely when Heitholt was being murdered, according to witnesses, autopsies, and forensics. "Boyd could not provide me with any further information," Short wrote.

Just before midnight Nov. 2*, CPD officer Lloyd Simons interviewed Boyd.  Though it was less than 48 hours after the first interview, Boyd now had further -- and much different -- information.
He told Simons about the Tribune's time clock procedures, and how he had come to the building around 9 pm, after he took his kids trick-or-treating.  He and Heitholt "spoke throughout the evening," talking about the World Series and other "chummy" stuff.   He "recalled seeing the black and gray cat on the lot that Kent always fed."

Then, Boyd's story changed.   No longer was he standing talking to Heitholt about the cat.  Now, Boyd was in his car across the parking lot "when he noticed the cat using Kent's back vehicle tire as a clawing post and laughed to himself."   He also saw Heitholt leave the Trib building from his car.

But Boyd told Simons he had "his radio up and was not paying attention.  He mentioned to Kent the cat was using his tire as a scratching post, and they laughed."   They spoke a little more, and Boyd said he turned westbound into the alley and north onto Providence (see map here).

The two police reports are below for comparison.  In both stories, Boyd said he did not see anything suspicious in the parking lot, another claim he would later change.