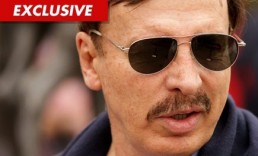 The Stanley Kroen-icles continues with a "Where's Waldo?" tale about a 300 lb. man with a gun
COLUMBIA, 1/5/12  (Beat Byte) --  Columbia's own Billionaire Bad Boy -- Stan Kroenke (left), aka He Who Pays a Pittance in BoCoMo Property Taxes While Violating City Ordinances Without Paying Fines -- sought a restraining order last month against an employee Kroenke says stole a gun from him and then tried to kill himself.

Mark Waldo -- a 6' 2", 300 pound Kroenke property manager -- swiped the gun from Kroenke's mansion in the Malibu hills in late November, TMZ reported.
Police responded when Waldo tried to shoot himself in the head.  Kroenke testified in court documents that police placed Waldo -- who had been living in Kroenke's home (!) -- in a psychiatric holding cell.   The restraining order requires Waldo to move out of the home -- and stay 100 yards away from Kroenke and his wife, Wal-Mart heiress Anne Walton Kroenke.
RELATED:
http://www.columbiamissourian.com/stories/2011/12/12/city-decides-not-fine-kroenke-group-osco-site-violation/
http://columbiaheartbeat.blogspot.com/2008/07/assessor-shocker-millionaire-tax-breaks.html