Continued from Part One.

He remembers cool air warming toward a “typical hot-season day”; the “young, wonderful” Sgt. Dominic Morales, a reception clerk with a “big smile and great people skills”; and a patient-centered routine that started at the front door.

“Everyone had to disarm,” Jones explains.  “Our firearms stayed in a locked room until we left the building.”

“Part of our duty was to preserve the soldier’s identity, as a person of strength in a difficult setting doing an important and dangerous job,” Jones says.  “We tried to stay clear of any suggestion that a soldier was ceding his or her uniform to a hospital gown, and his or her identity to patient-hood.”

Mental health staff was also mindful of confidentiality.   Had Jones not already testified in a widely-reported hearing about Russell’s condition, he would not be speaking now.

“We had to create a confidentiality environment to be effective,” he explains.  “No one was supposed to be considered less fit for duty as a result of visiting the combat stress unit.  We believed it should be considered a strength—not a weakness—that a soldier sought help for an issue that might affect his or her job.”

Jones saw up to 10 soldier-clients daily, quietly calling only a first name in the waiting room, exchanging a greeting, and inviting the client back to his office and a chair next to the door.

“I set the chairs there for a reason,” Jones explains.  “We wanted the experience to feel as non-threatening as possible.  This wasn’t a locked ward; it wasn’t a mental institute.  It was a clinic dealing with workplace stress, first and foremost designed to get our soldiers back to their units and back in the saddle.”

This was the middle of Baghdad, after all, in the middle of war.   The consequences of falling off the saddle and staying on the ground could be life threatening for everyone.

Russell arrived for his Sunday appointment from Camp Stryker with a single escort, 1st Lt. David Vasquez.  Protocol normally called for two escorts whenever a soldier was deemed dangerous or oppositional.  “I made a mental note of it,” Jones says.  “I don’t think he was under formal escort that day.”  Russell also told Jones he had come voluntarily, not under orders from his command.

Then began what Jones describes as a “20-questions style of analysis” that sought to get at whatever was bothering the soldier.   In a “low tone, deliberate and grumbling,” Russell spoke with “utter contempt” for his previous clinical contacts between Springle and Fernbach.   Based on Russell’s description, Jones suggested he might have had a panic attack in Fernbach’s office.

“Sgt. Russell then said he had no history of panic attacks, but that he thought he’d been ‘mildly depressed’ all his life,” Jones explains.  “He also said someone told him he had PTSD.”

On further questioning, Russell exhibited no compelling picture of either depression or PTSD—post traumatic stress disorder.   “His complaint came across as situational.”

Jones spoke to Russell about how to use adversity for personal growth.   He suggested anger management and relaxation techniques—forms of occupational therapy.

Russell seemed disinterested in these suggestions, waving them aside one by one.  It became clear to Jones he wanted out of the Army, period.

“You’re not showing signs that would justify such a drastic response,” Jones told Russell.  “Despite what he was saying, he had shown no signs of self-harm.”

The process of discharge from the front lines -- evacuation -- was serious business, Jones explained, reserved for only the most dire circumstances.   He now worries Russell took the admonition as a kind of road map:create a dire circumstance; get a discharge. 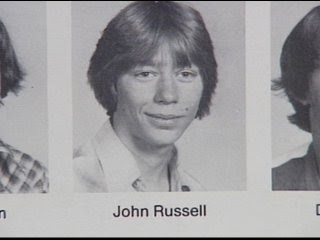 After the hour-long interview, Jones prescribed a mild anti-depressant, “a small dose of Paxil,” walked Russell back to the waiting room, and scheduled a follow-up for the next afternoon.  “I told him I looked forward to seeing him again,” Jones says.  “He grumblingly agreed.”

Vasquez drove Russell back to Camp Stryker, about 30 minutes away.

“I fully expected to speak with Charlie [Springle] before Sgt. Russell’s follow up,” Jones says.  “I wanted to find out if he had seen as little as I saw.”