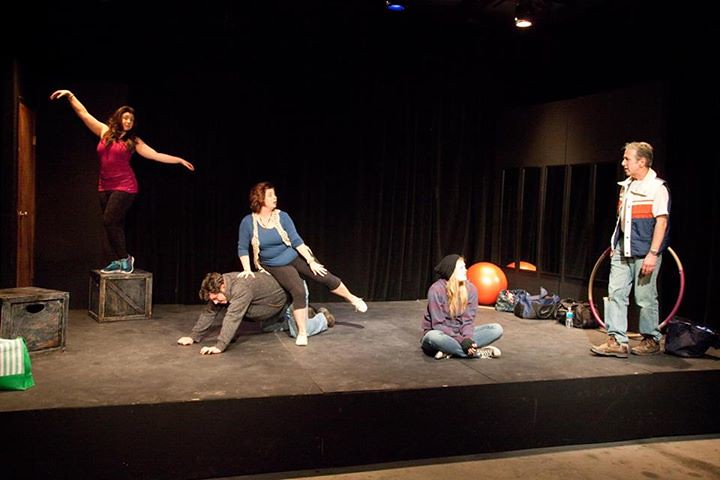 A well-cast quintet of actors transformed themselves -- and each other -- in yesterday afternoon's final performance, a story of three women -- Marty, Theresa, Lauren -- and two men -- Schultz and James -- in a 6-week community theatre class for acting newbies.

Nora Dietzel plays Marty -- the class instructor -- with a restrained sadness that looms from the first class, during which her students are so out of touch, they are unable to lie in a circle and -- without looking at each other for cues -- count in sequence from one to ten.

There's enough neurosis in the room for five acting classes, and Marty finds herself in the role of a lifetime:  life coach whose routine exercises in the craft profoundly change her students.  Dietzel smiles through Marty's pain to get this important job done, at times looking wistfully toward the audience, eyes glistening with incomplete tears.

"I think I may be in love with Theresa."

Another ton of bricks, but less surprising than the first from what we know about Schultz (Craig Yager) and Theresa (Natalie Burling).   Yager plays the recently-divorced -- but still pining for his ex -- carpenter with a transparent desperation that repels the women he loves, forcing him to seek solace from an internal emotional reserve of which he's unaware until the end of the class.

At first, Schultz's neurosis is so embarassing we want to hide our eyes.   Stumbling over every word, he awkwardly introduces himself to Theresa, then throws himself at her.

But Yager brings to Schultz a loveableness that makes you want to watch -- and keep watching.   While his awkwardness never fades, it becomes understandable, even sweet, as we see him open his locked-down heart to the possibility of love, again.

Burling plays Theresa like the actress she is -- or was, or wanted to be -- before fleeing New York City -- and a bad relationship -- for Shirley, Vermont, the small town headquarters of this touching head trip.

True to form, Theresa overplays her staged exercises, as when she tells the group about meeting the ultimate oxymoron -- a Jewish anti-Semite -- on a subway car.

The "bearded, big-nosed" fellow was trying to convince four black men that Jews plotted both 9/11 and the Holocaust, Theresa gushes.  Her confused, overwrought retelling is so ridiculous, it becomes Marty's First Lesson:  People are often not what they seem.

"He kept calling it the Jew. S. A.," Theresa insists, to audience guffaws.

"But are you SURE he was Jewish?"  Marty asks.

Absolutely, Theresa persists, damned if she's going to give up even one of her preconceived notions.   Mistaking pride for strength, Schultz is promptly swept off his wary feet by the younger woman, only to have her dump him.

Circle Mirror's "straight man" is Lauren, a confused, angry 16-year-old who wears awkwardness on her sleeve and deadpan on her face.

Played by Jessi Green with such remarkable body language the audience hung still whenever she rose or spoke, Green as Lauren becomes the group's sounding board.   Quietly -- and reluctantly -- she absorbs their stories, unaware that by listening she is caring, and that by caring, she is leaving the self-absorbed teen behind. 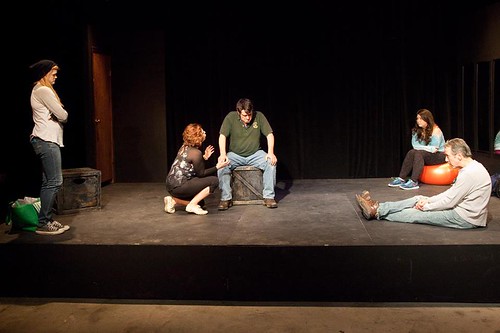 With a plasticity of expression that moved him from comic to tragic with alacrity, Dan Harrison plays Marty's husband James, a former lady's man whose handsome face is aging and stressed.

During a private interlude, the audience learns James' daughter speaks only to her mother now.  Her father cheated on Marty, and she cannot forgive him.

Through a role-playing exercise, we also learn how husband and wife were truly, madly, and deeply in love once, taken with the possibilities they saw in one another's eyes.

They are out of love now, another personal discovery Marty's exercises reveal.

By show's end, the subtleties of empathy have so tuned the group into one another, they are able to share, with marvelous restraint, the deepest, darkest secrets of their lives.  It's both surprising and devastating when Marty tells them to write, anonymously, the one secret they've never shared with anyone -- to share with everyone.

She mixes the written confessions, passes the slips of paper around, and insists her students read them aloud.  "What if I draw my own secret?" Schultz asks.

"Don't worry," Marty says.  "No one will know it's you."  The secrets follow, each one a ton of emotional bricks, falling off the back of its keeper.

The group repeats the floor exercise, and to no one's surprise, the numbers one to ten circle the room without a hitch.  The role playing, word games, head games:  they've worked, even if not toward happy endings for all (Marty and James split up).

"I sometimes feel that everything I do is propelled by my fear of being alone," another anonymous secret reads.

But after taking the class, Marty and her students aren't alone anymore.  They have each other and more importantly, they have themselves.