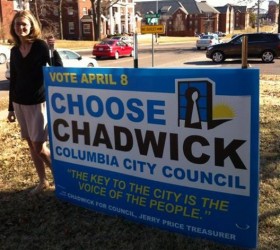 Though city clerk Sheela Amin has made no public announcement of the findings, Boone County Clerk Wendy Noren has validated over 300 signatures from registered voters.   Under Section 136 of the Columbia City Charter, petitioners needed 249 valid signatures.   The validation information has been sent to Amin's office.

The Chadwick recall is not over, however.   The City Charter divides the process into four sections, 136-139.

After satisfying provisions of Section 136: Recall Petition, the process moves to Section 137:  Recall Election.  "When a sufficient recall petition has been filed, the city clerk shall submit the same to the Council without delay, and the Council shall call an election on said recall at the next election...."

Section 138 spells out what the Recall Ballot will look like.  In this case, "Shall Ginny Chadwick, First Ward Columbia City Councilwoman, be removed from office?"  ( )YES  ( )NO

If Ms. Chadwick is removed via the recall election, then according to the Charter, her vacancy "shall be filled by the Council for a period running to the next regular election," likely April 2016.

Councilwoman Chadwick attracted the ire of several organized opposition groups, first for her public support of the Opus downtown student apartment, followed by a succession of political gaffes, from a broken campaign promise to decriminalize small marijuana growing operations to a plan to ban alcohol in historically-black Douglass Park.

Despite the opposition, Ms. Chadwick may still have the chance to retain her seat, if she can convince enough voters to vote against her removal.   If she is removed, the Charter prohibits her from running for any city office -- including her own -- until her original term expires (April 2017).

Meanwhile, with the Council charged with replacing her for a year, a big question mark exists as to whom they might choose for that job.