DUE PROCESS BE DAMNED! How some CoMo City Council members justify bad decisions 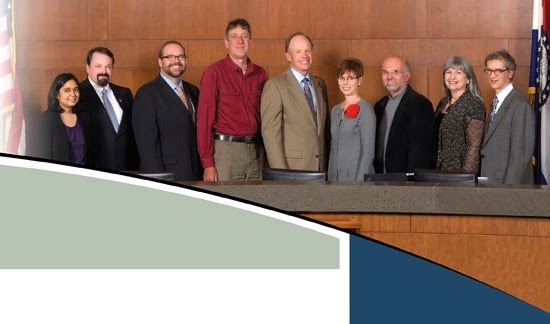 COLUMBIA, Mo 3/24/14 (Op Ed) -- Like many, I should be stunned about the Columbia City Council's 4-3 vote in favor of the six-story Opus student apartments downtown.

But realizing where each Council member stands on due process kept their votes from surprising me much.  They were actually quite predictable.

Introduced and debated at two noontime meetings during a Rush Week-style schedule, and following the Biggest Lie in recent Columbia memory -- that downtown development was "shut down" over a faux infrastructure crisis -- Opus and two other student apartment projects wandered as far from due process as I've seen this Council go.

Watching the debate from the audience last Wednesday, I realized only two Council members -- Ian Thomas and Karl Skala -- consistently support due process.

The same three Council members dispensed with it who almost always do:  Robert McDavid, Michael Trapp, and Fred Schmidt.  The two Council members with mixed records on due process -- Laura Nauser and Barbara Hoppe -- predictably split on the Opus decision, Nauser on the pro-business side, Hoppe on the pro-gressive side.

To justify her "yes" vote, Mrs. Nauser implied there had been plenty of due process.  "We've been having these conversations," about development fees, infrastructure costs, and so forth, she emphasized.  "We've discussed these issues."

So what?   So what if we discuss basement sewer backups in the central city, or the need for developers to contribute a fair share?   Senior city staff ignores our discussions, while projects for crony capitalists steam ahead.  Telling the little people how much we discuss their problems is just more hot air.   Talking about stuff is not enough, especially when due process leaves the room.

Lack of due process hasn't only riled debate over more student apartments.  It's led to an unfortunate hallmark of the McDavid administration:  the Council Do-Over.

Blight/EEZ -- approved, then overturned.  Hiking property taxes for more cops -- pushed, then panned.  The TIF District -- rammed down our throats, then squarely defeated.  The Providence Rd. historic house demolitions -- approved, then overturned.   The Niedermeyer demolition -- muddled into a demolition moratorium.   And had the public not raised its voice, a 2011 move to gerrymander the 1st, 3rd, and 4th Wards would have doubtless prompted another Council re-do.

It's not just the lack due process that has prompted public outrage this time around.   Council behaviors have aggravated an already bad situation.  Dr. McDavid's crankiness, threatening to have people expelled from the hearings;  Mr. Trapp's dimestore sermonizing;  Mr. Schmidt's insouciant elitism;  Mrs. Nauser's motherly scolding, which loses its power when she's shooting down:  All have been on unfortunate display, marshalled to defend bad policy. How bad?  Check out what Mr. Schmidt said during the Opus debate:  "We're always gonna be behind on infrastructure.  Now comes a developer, someone who's willing to add value and beauty to our town, and we're not ready.  We're never gonna be ready.  Who knows where we won't be ready next."

"We have a trust and confidence problem in our community," Mr. Thomas said.

But that's what happens when public officials dispense with the only thing left we can count on:  due process under the law.