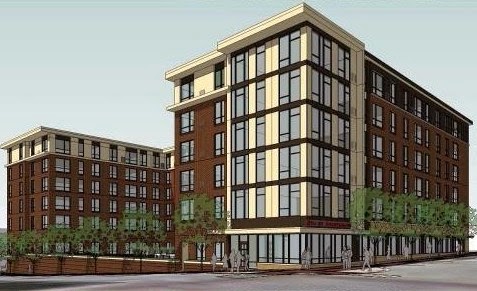 COLUMBIA, Mo 7/6/14 (Analysis) -- With citizen petition efforts leaving a first development agreement in tatters and a second on life support, the Opus Development Group is forging ahead without the publicly-funded utility and infrastructure guarantees such agreements  provide.

The Columbia City Council is poised to approve the year-long closure of several public streets, sidewalks, and an alleyway Monday night, so the Minneapolis-based developer can construct a controversial six-story student apartment building in the center of downtown.  The land is presently owned by Medford, Oregon resident Peggy Proctor Tomlins and Moore and Shryock, a real estate appraiser.

"To facilitate construction of an apartment building at 127 S. 8th Street, Opus Development is seeking permission to temporarily close portions of sidewalks and parking lanes between Locust and Cherry and between Seventh and Eighth Streets," reads Resolution 118-14 on the Council's "consent agenda."

Items on the consent agenda receive automatic approval unless a Council person requests their removal.  "The closure is scheduled through July 31, 2015."

With recent Council assurances to provide Opus the publicly-funded infrastructure previously deemed in critically-short supply, all indications are the developer will thwart public opinion -- and public control of public property -- by building the apartment absent a development agreement, but with City Hall's cooperation.
"There is no longer a need for infrastructure-related development agreements downtown because the utility issue has been addressed," Councilwoman Laura Nauser told the Columbia Missourian.

If the second development agreement is ultimately repealed (a repeal petition is only 140 signatures short), Opus' gambit will mark an unprecedented end run around the rule of law and public governance.  Opus' City Hall supporters -- Mayor Bob McDavid, and Council members Michael Trapp, Ginny Chadwick, and Nauser -- have emphasized the developer "has the right zoning -- C-2" to get a permit and start construction.

But the right zoning is not supposed to be enough for a project of this size that must secure extensive use of public facilities -- water, sewer, power lines, stormwater drains, public streets and so forth.   The development agreements deal with this issue in a series of declarations:

WHEREAS, the Project to be constructed by Developer is a significant change of use from the existing use of the Developer Tract; and

WHEREAS, prior to issuance of a building permit to construct the Project, City and Developer desire to ensure adequate utilities and public infrastructure exist to serve the intended use; and

WHEREAS, the City has conducted a survey of existing public infrastructure within the overall downtown Columbia geographical area, which includes the Developer Tract; and

WHEREAS, inadequate water, fire protection, electric, storm water and sanitary sewer facilities exist to serve the proposed increase in use of the Developer Tract; and

WHEREAS, it is critical for Developer to receive the assurances and protections provided by this Agreement; and

WHEREAS, establishing the terms and conditions under which utilities will be provided to the Project will protect and benefit the health, safety, and general welfare of the City and is in the best interest of the public.

Now, however, City Hall appears prepared to dispense with worries over public health, safety, and welfare, and proceed absent an agreement, doling out public property, public right-of-way, and publicly-owned utility capacity as the developer requests.

"Opus has the C-2 zoning and legal right to build as they wish," Nauser told the Columbia Missourian for a story about the street closures.