“I am not willing to support it until we can bring it to the public with a vote," Skala told the Columbia Tribune. "Doing so would be wrong."
Matthes -- who controls which bills and resolutions appear before the Council and when -- literally snuck the tax increase onto the "Consent Agenda," where it would have been automatically approved for an August 6 final vote without Council discussion.

Skala repeatedly condemned the move.  "I am surprised this showed up on the agenda. I am surprised it’s there, and I am not happy about it,” he told the Tribune. But the Third Ward Councilman said nothing at the meeting.

The only Council member against the tax increase, Mayor Brian Treece ordered it removed from the Consent Agenda for Council discussion.

"I'm opposed to raising property taxes without a public vote," Treece said at the meeting. "I think we've worked very hard to restore public confidence in city governance, and I'm concerned that even the discussion of a potential property tax increase without a public vote undermines that public confidence."
While Skala had no explanation for his YES vote, other Council members did.

Second Ward Councilman Mike Trapp supported the hike from the get go.  "It's not that much money," he told the KFRU Sunday Morning Roundtable, reiterating earlier comments about the 2.3 cents per $100 assessed value tax.  "It's a minor impact," Trapp told the Tribune.
Fourth Ward Councilman Ian Thomas argued his YES vote was little more than raising the tax rate ceiling. 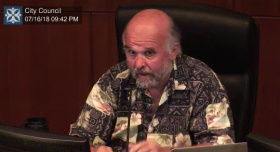 "Oh, I don't think so," Thomas replied. "It's just raising the ceiling."

Thomas also acknowledged that only four people -- the Council majority -- control the tax hike's fate.  "We can perfectly, legitimately" keep the tax where it is "if four of us want to do that."
Calling the no-vote tax hike a "drop in the bucket", Columbia Police Officers Association (CPOA) director Dale Roberts tried to warn Council members away from passing it.  CPOA supports a larger property tax for more cops, he said, but only if it's put to a vote of The People.
"I think if you pass a tax without the public voting on it, which is essentially what this would be, you're gonna ruin the chance of ever passing anything again," Roberts told the Council.  "People are already upset that this conversation is even taking place, that the Council would even consider raising taxes without a vote.  I hate to see the Council go down that road.  I think it really damages the chances of anything being done in the future."

After Roberts spoke, Skala was still suggesting his vote would be NO.

"I can't do this, because of the political dance," he said. "It's very compelling for CPOA to suggest that there's a lot of chatter out there.  [Concern] about this tax increase is palpable."
Then, after everyone but Thomas had voted, Skala took a long pause and voted YES.  Before the Council votes on the tax hike, public can comment once, on August 6 at 7 pm, during the height of the city's summer vacation season.

Council tax hike discussion begins at 2:14:40 in this video.